War of Sigmar
created : 7 days ago

Warhammer 40000 : Saga of the Beast review (Fluff and Space wolves) 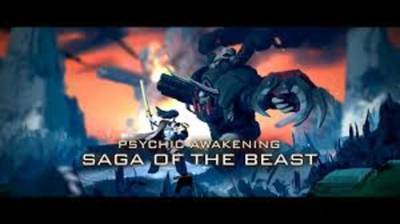 Hello everyone !! The saga of the Beast arrived today. I would usually whine about UPS delay but amidst the Covid19 outbreak I even feel bad for the UPS peoples.
Still, Saga of the beast is the sixth instalment of the Psychic Awakening Series, Aka 40k the Live Update before 9th hit the store ^^. This time the person of interests are Orcs, led by Ghaz with his awesome new model and Space Wolves led by Ragnar Blackmane, the Primaris Edition !

Let's jump right into it :

Saga of the Beast Fluff

As usual in the Psychic awakening series, there is no fluff progression. its more a picture of a battlefront between sw and orcs. In Saga of the Beast this is, even more apparent as the book only narrate battles after battles always with Spaces Wolves and orcs. Each time it's a different setting and cause so it's kind of a nice read but not change of the grand scale of things ^^


I like the one where a Spaces Wolves armoured division rushes the center of a speed waaagh to fight a looted Baneblade with a belt of orcs Psycker chained to it. When the SW reached it, the whole Whaaag teleported in the unknown ^^


Another one it's an army of Orcs mercenary that betray their client an imperial world and take the planet for themselves...(so Governor consider Orcs mercs as an option

In the end, these have no meaning on the grand scheme of narrative but it was an entertaining read!

Used to be my favourite part, not anymore ^^But one text block is an interesting : 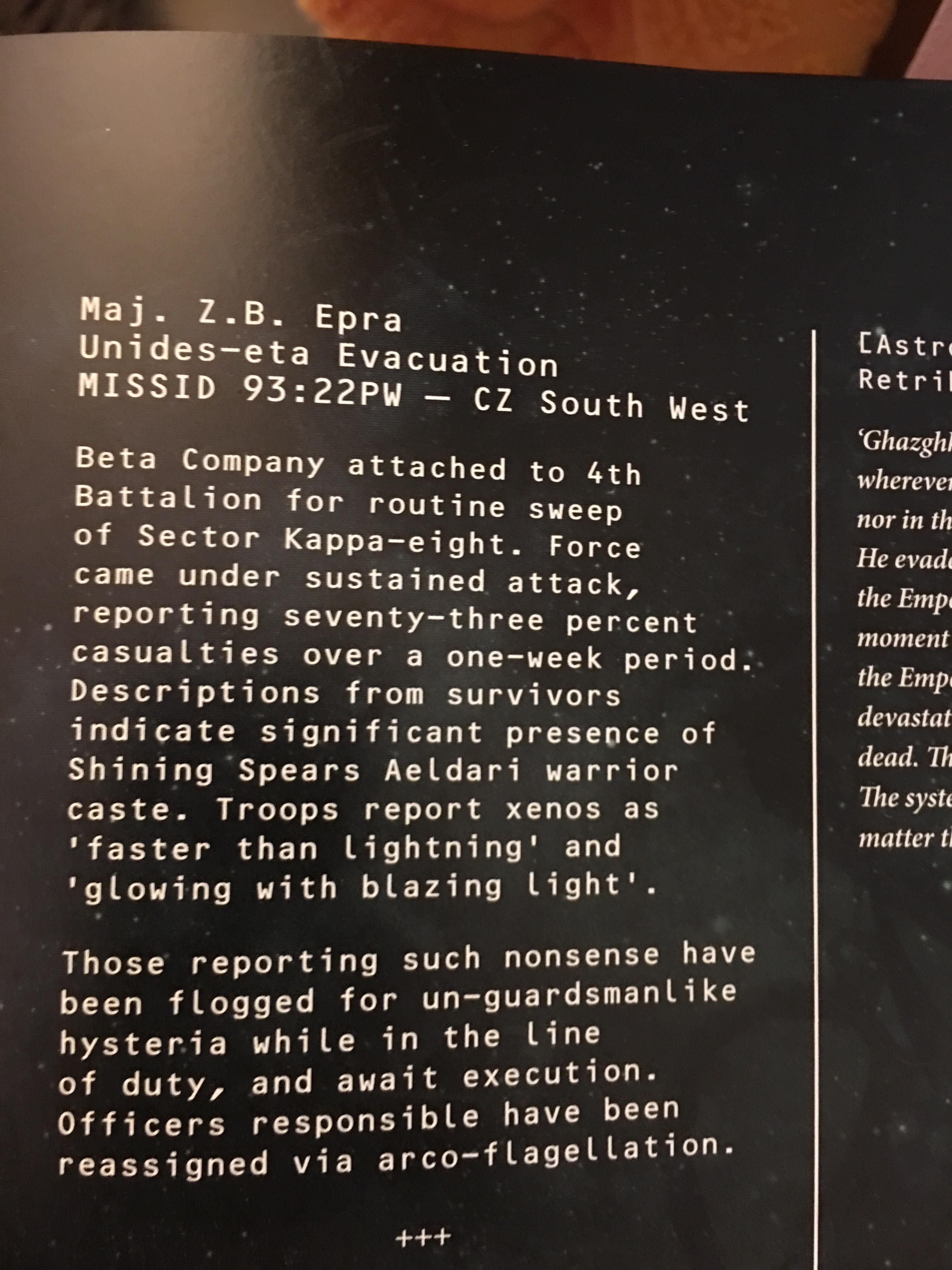 Maybe it means new shinning spears kit ? or an exarch ? or maybe even Drastanta? I don't know maybe it's nothing will see Friday if they reveal something.

Another block worth a mention : 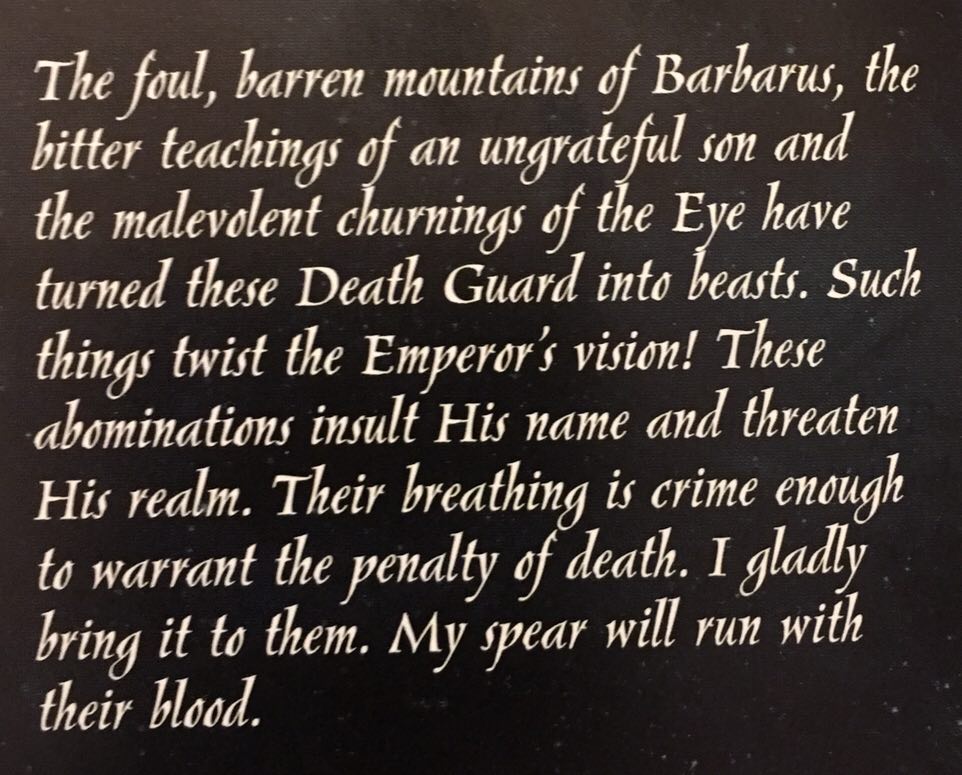 Death guards were bound to arrive at some point don't you think ? ?

Ragnar became a Primaris after a fight with Ghazghkull Thraka on Krongar ! usual story, near-death experience, transformation.
Ragnar stats were already shown and he's at 120 points. He's quite nice if you need to mow down Primaris Infantry ^^

-Spaces wolves gain all the doctrines (with the nerf of course) and the other specials rules common to Spaces Marines.
- 2 new rules : 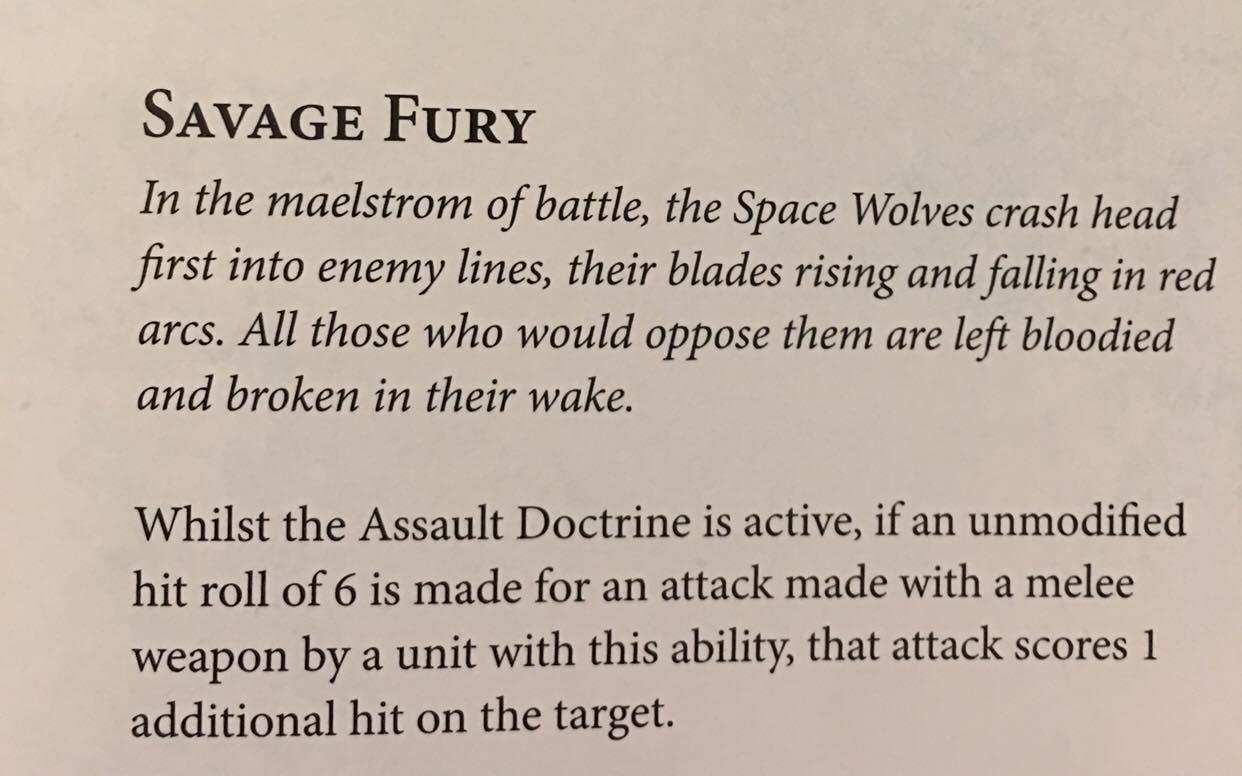 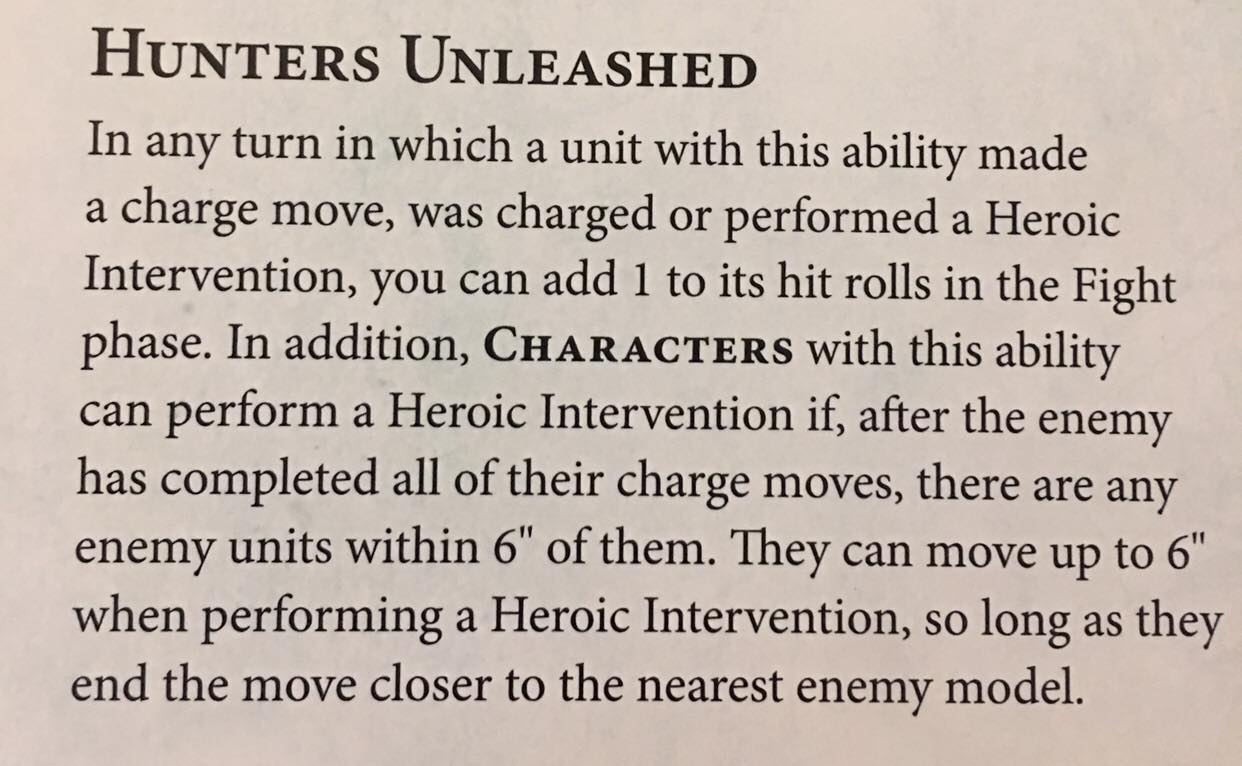 This release
-All primaries unit integrated to the SPace wolves.
-Multiple Specific characters were Primarised, like wolf priest, battle leaders, wolf lord in phobos armor... apart from the Wolf Priest all these transformations are in name only, as they are exactly the same as the standard version from other SM books.Only the name of the pieces of equipment and rules were changed and that is a bit sad...
-Primaris wolf Priest is a Primaris Chaplain but with the Healing Balm Rules as per other Wolf Priest.
-Obscuration Discipline added (no surprise)
-Litanie of Battle added as well for SW chaplain equivalent

Regular traits for a warlord in Phobos 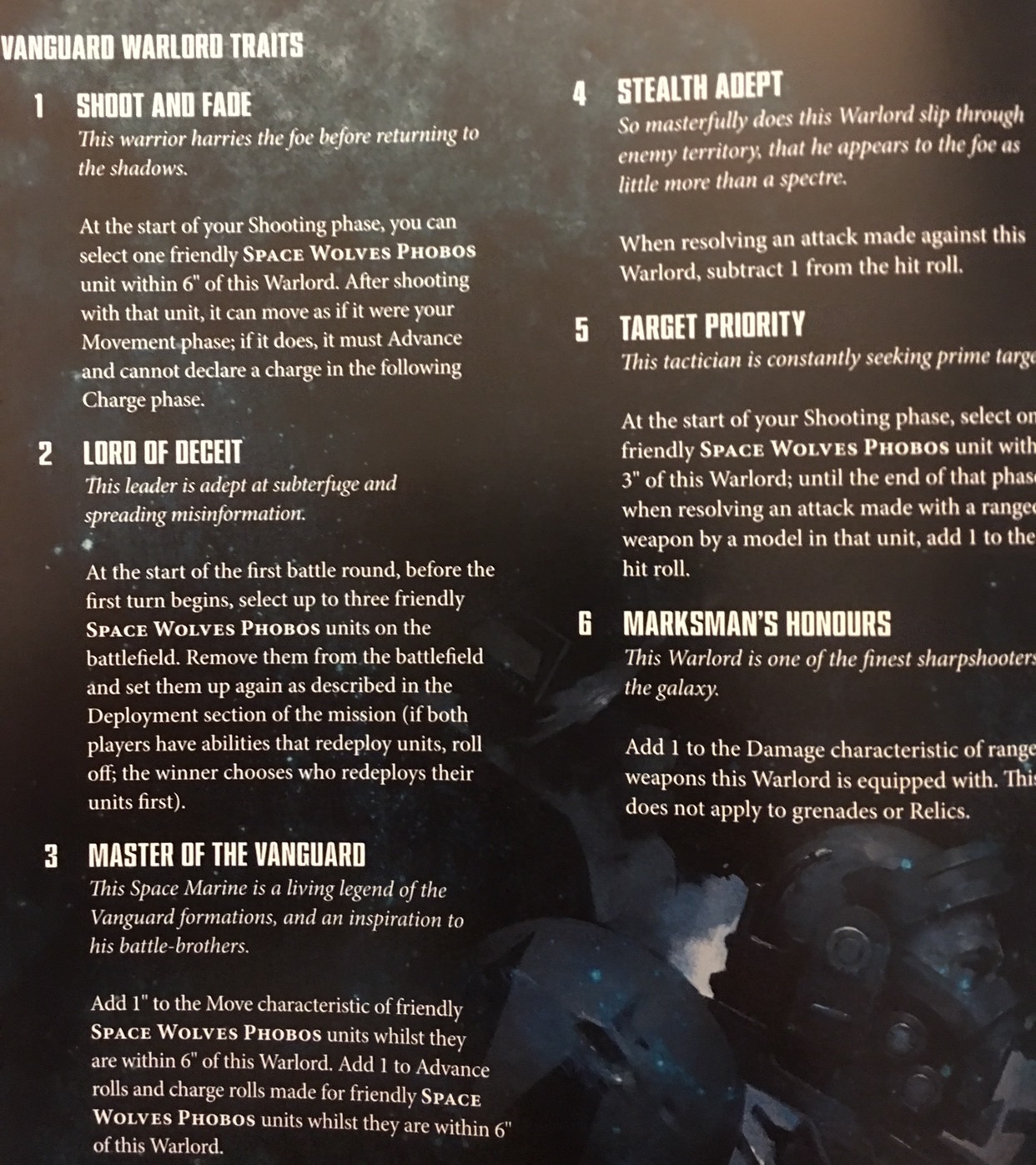 Three pages of Stratagems, i know that' s a lot but they incorporated all the major ones from SM dex and Chapter dex. Also you get a few SW specific like :

Touch of the wild 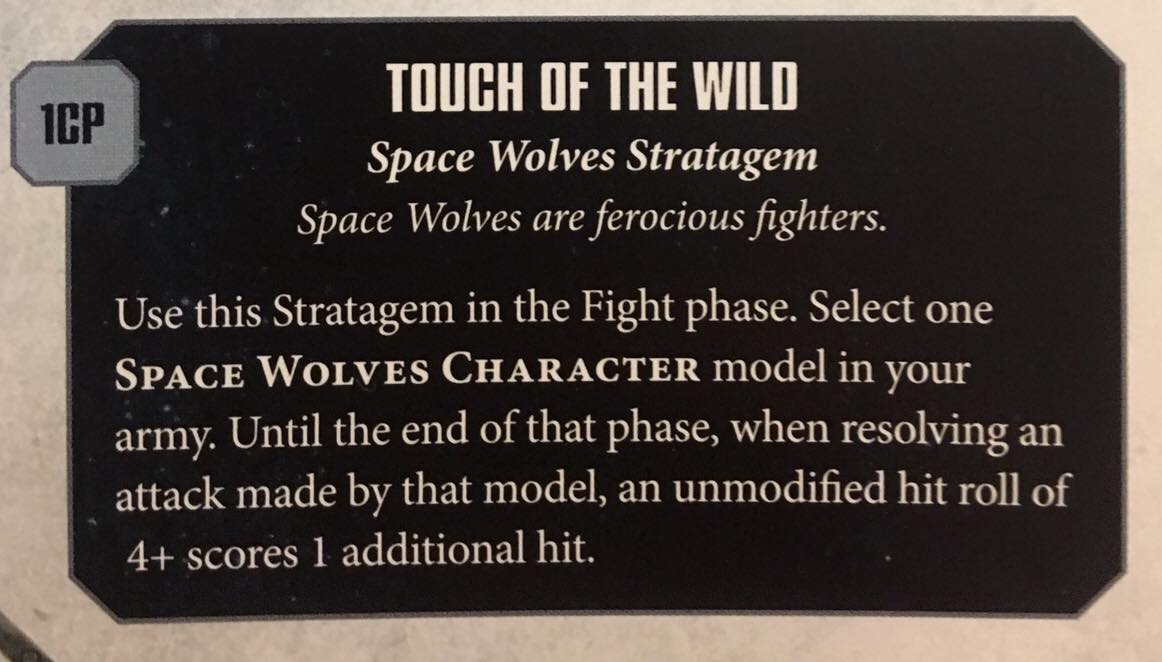 Knowledge of the foe 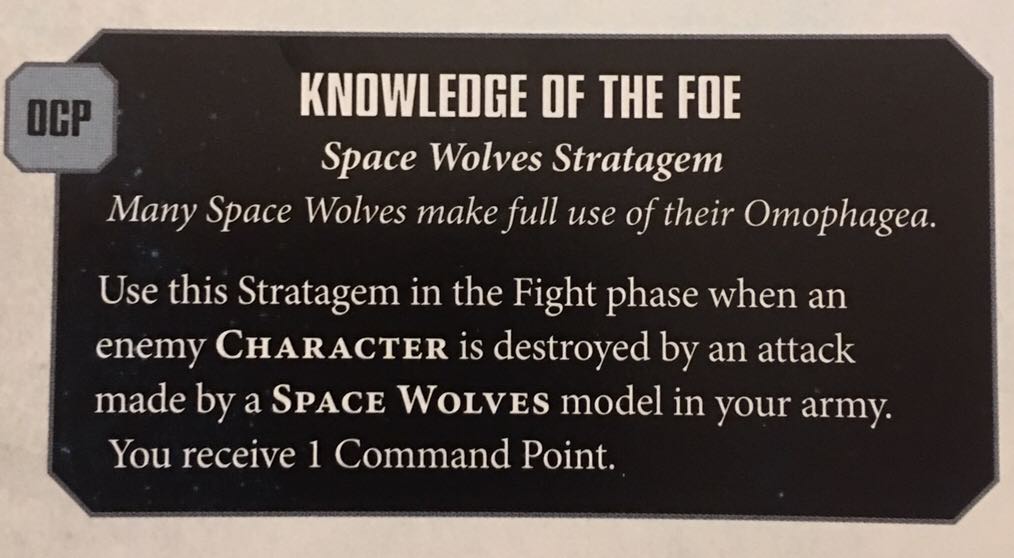 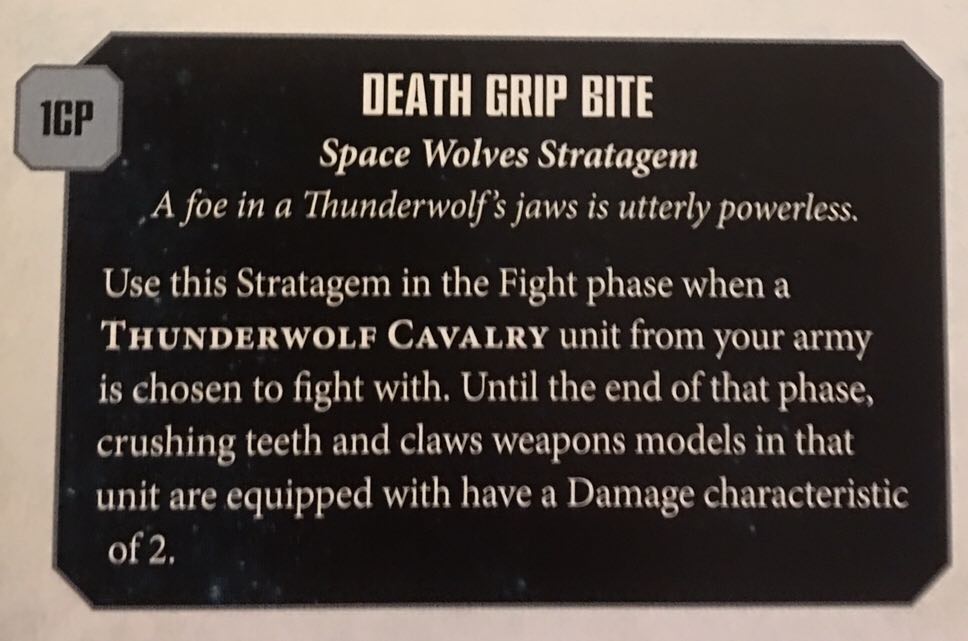 Double the damage of the wolves so it's good for one CP and combine super well with Space wolves added abilities. 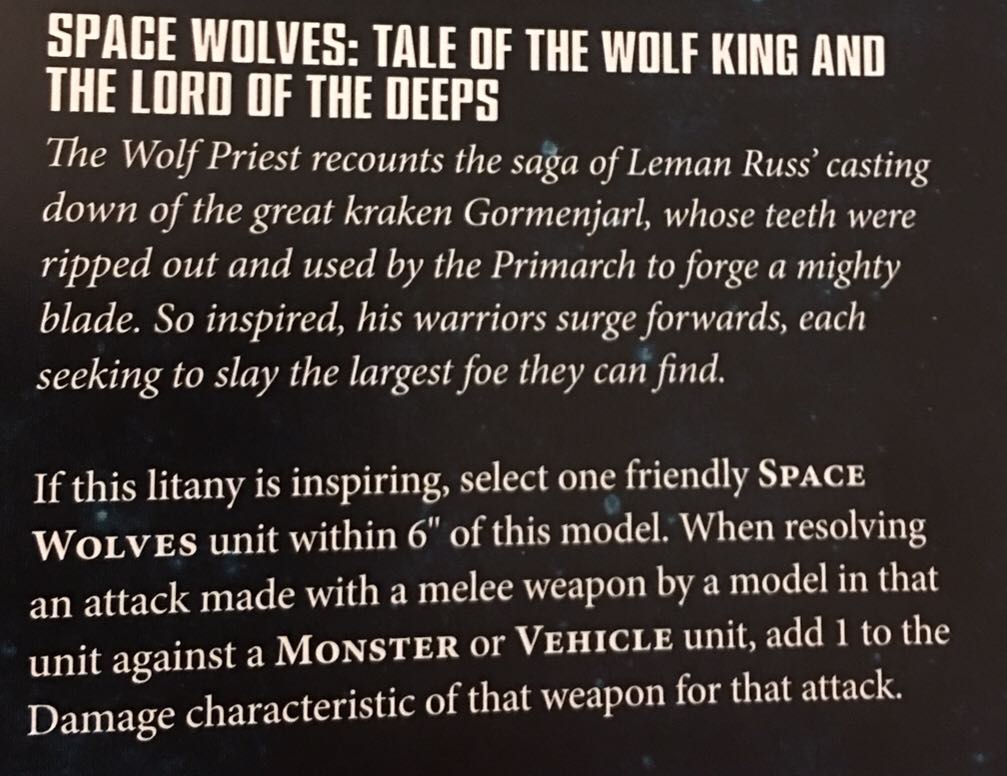 Potentially as strong as an Orc Warchanter buff from AOS, but the targets are limited. Still, rules state that Wolf Priest know this litany besides their normal selection, so you can always use it when needed for a 100% increase in damage on basic CC attacks. A simple Intercessors Spaces Wolf unit can shred a lot of targets with this litany : 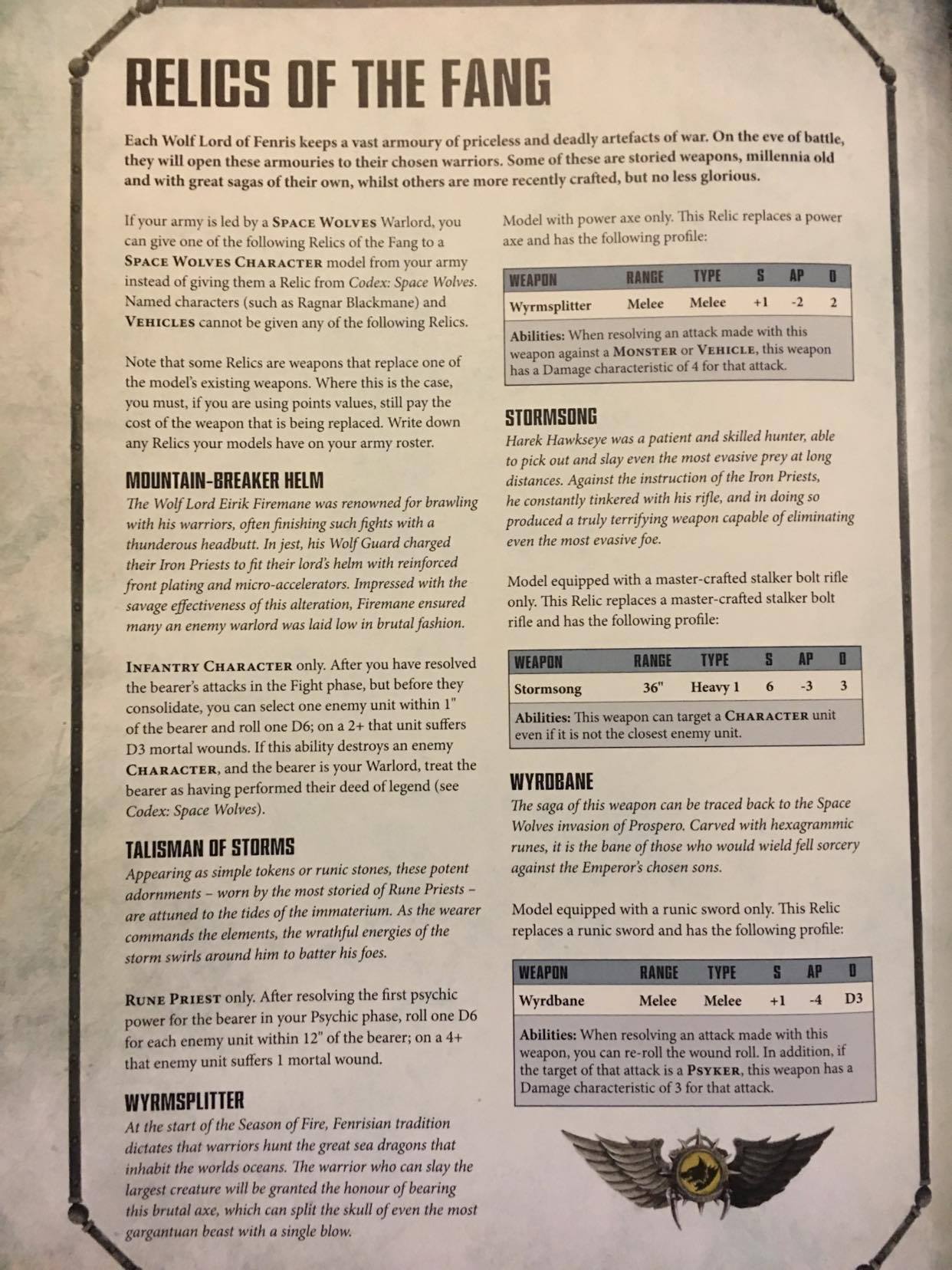 Nothing incredible they also get access to generic relics from other SM books.

That wraps for the first part of the review! The book is decent, vital if you play SW or Orcs. I grow bored of the Psychic Awakening line of books... all this milking for a few changes or addition are BOooooring !