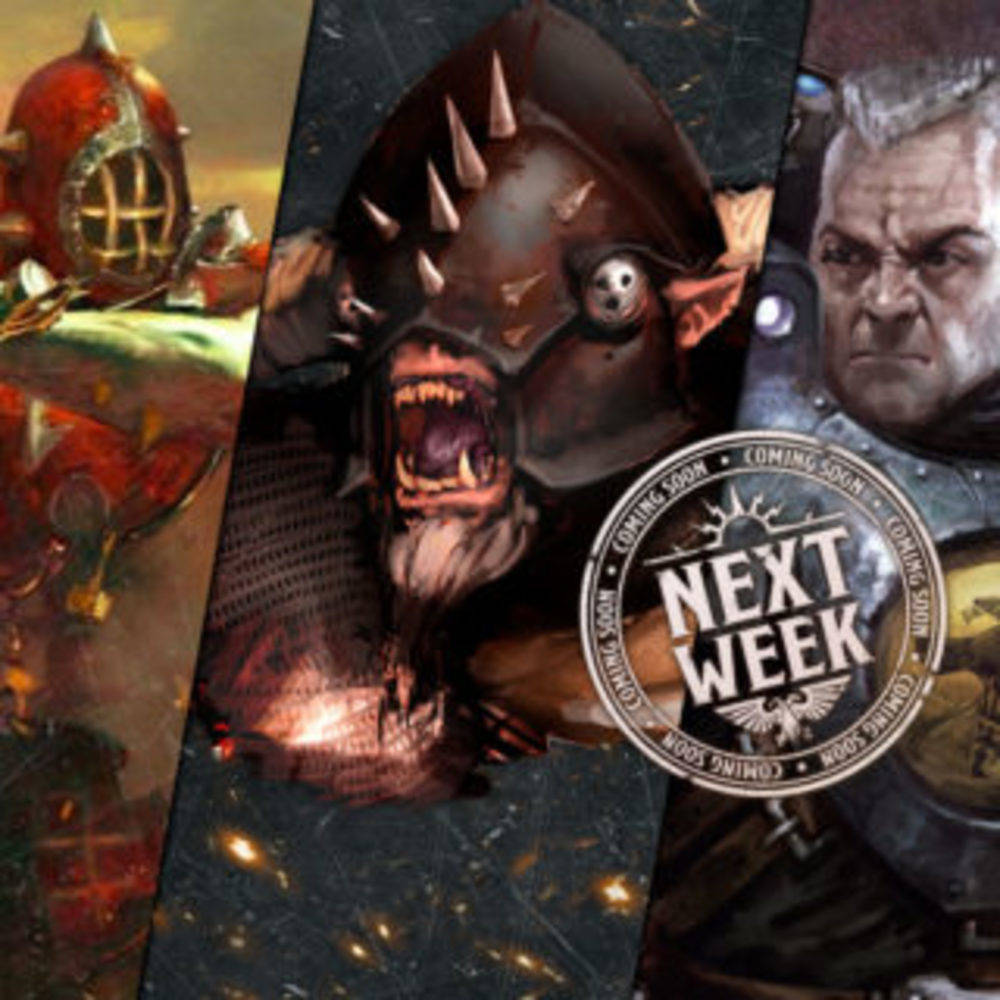 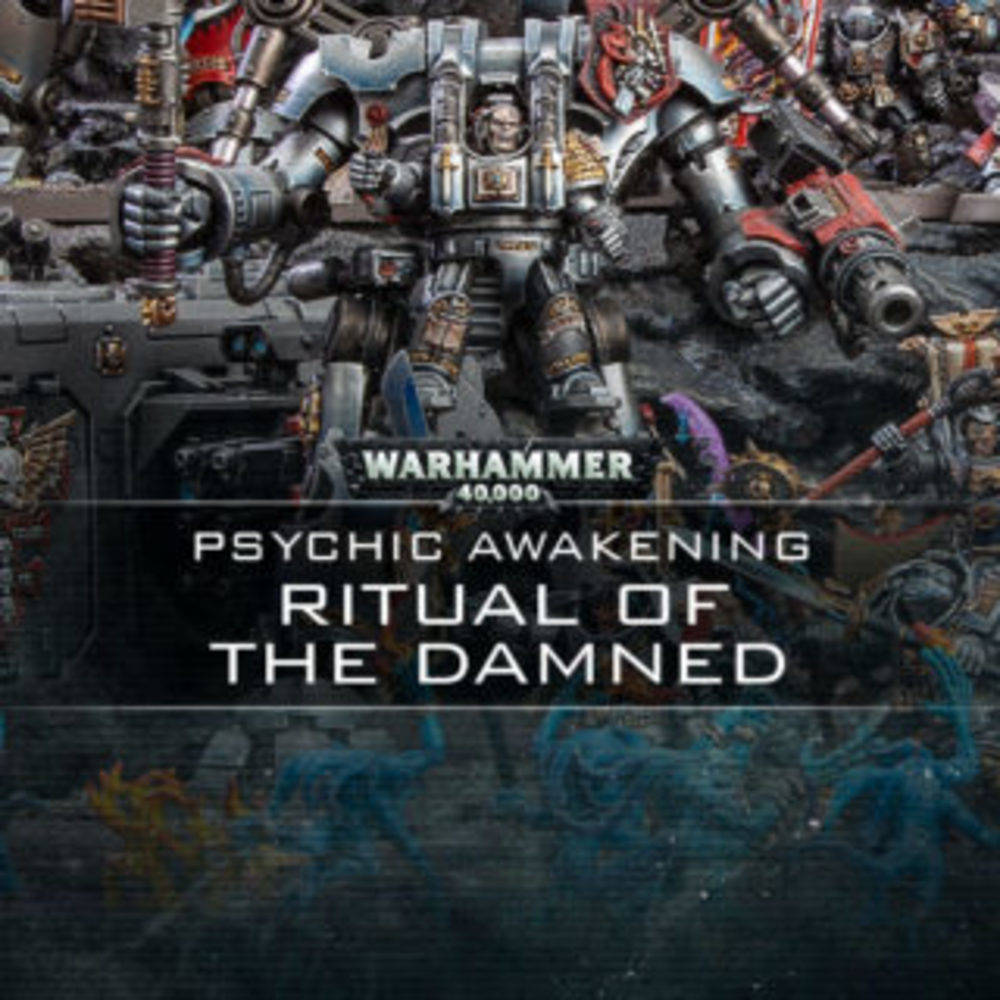 Blood of Baal is the third instalment of the ongoing series Psychic Awakening. The series is the aftermath of the galaxy post-Cadia/Indomitus crusade. The first episode was on Eldar and was moderately interesting, the second book about CSM & Black Templars was not great and I hope the third one will have some good fluff.

The situation in a nutshell 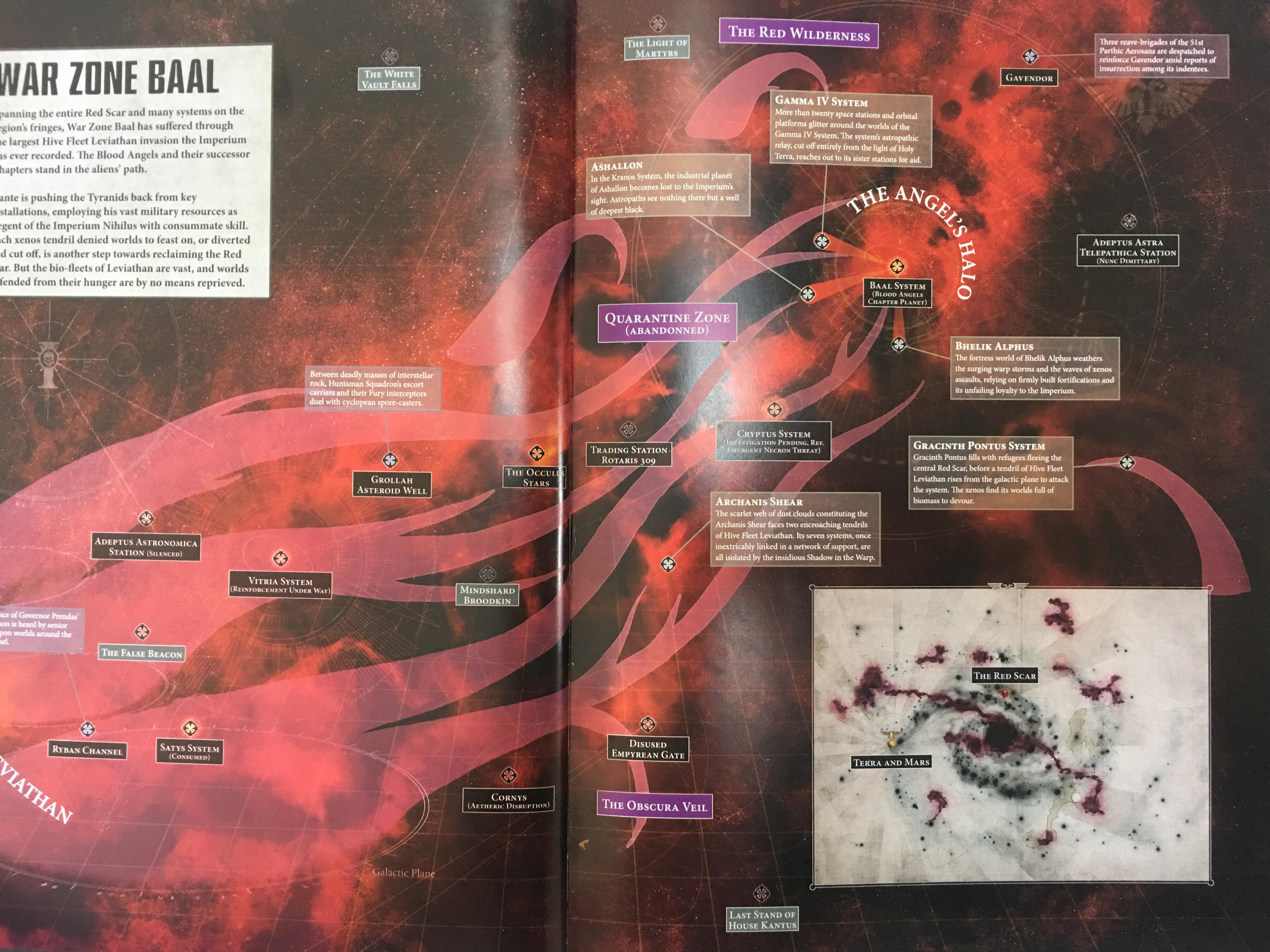 The Red Scar is a section of the galaxy that got hit by a tendril of Hive Fleet Leviathan. This is the largest Nids invasion recorded (made by leviathan) and of course, at the core, there is Baal (the whole thing is named War Zone Baal).

To be honest, the fluff is not very detailed. It briefly talks about the event of Cryptec, where BA and Necrons allied together to defend those worlds. Then the hive fleet comes to Baal (Devastation of Baal). from there the timeline and the details are a bit foggy. But in a nutshell, Nids attack, all hope is lost.

In this version of the fluff, Blood Angels were saved by the Warp this time. When the great rift appeared after the fall of Cadia everything went upside down in the zone. When radars started working again, the Tyranids Motherships were gone...Nids were nom nom nom by the Big Warp. No words of Ka'Bandha leading an army of Khornate daemons to clear Baal Prime

Still, there were innumerable numbers of Nids everywhere in the sectors. And while they had reversed to animal behaviour because of the loss of their motherships. The situation looked grim for the Blood Angels. Again they are saved and this time by Gulliman and his Primaris. Together they took back half of the planet Baal giving the time to the BA to regroup.

If you want more details, read these wikis :

Then we a few short stories about how it goes from there :

-Some Flesh tearer combats descriptions.
-Guilliman appoint Dante as Imperium Nihilus Regent
-Dante and other chapter master make a plan to take back Angel halo and then all the sector.
-Everyone Obey Dante now.
-New Psychic beast draining Astropath and obscuring a full planet.
-No more black ship cruise the Nihilus Imperium.
-SM librarians are doing scan for Psykers in the population, especially in all the refugees camp. 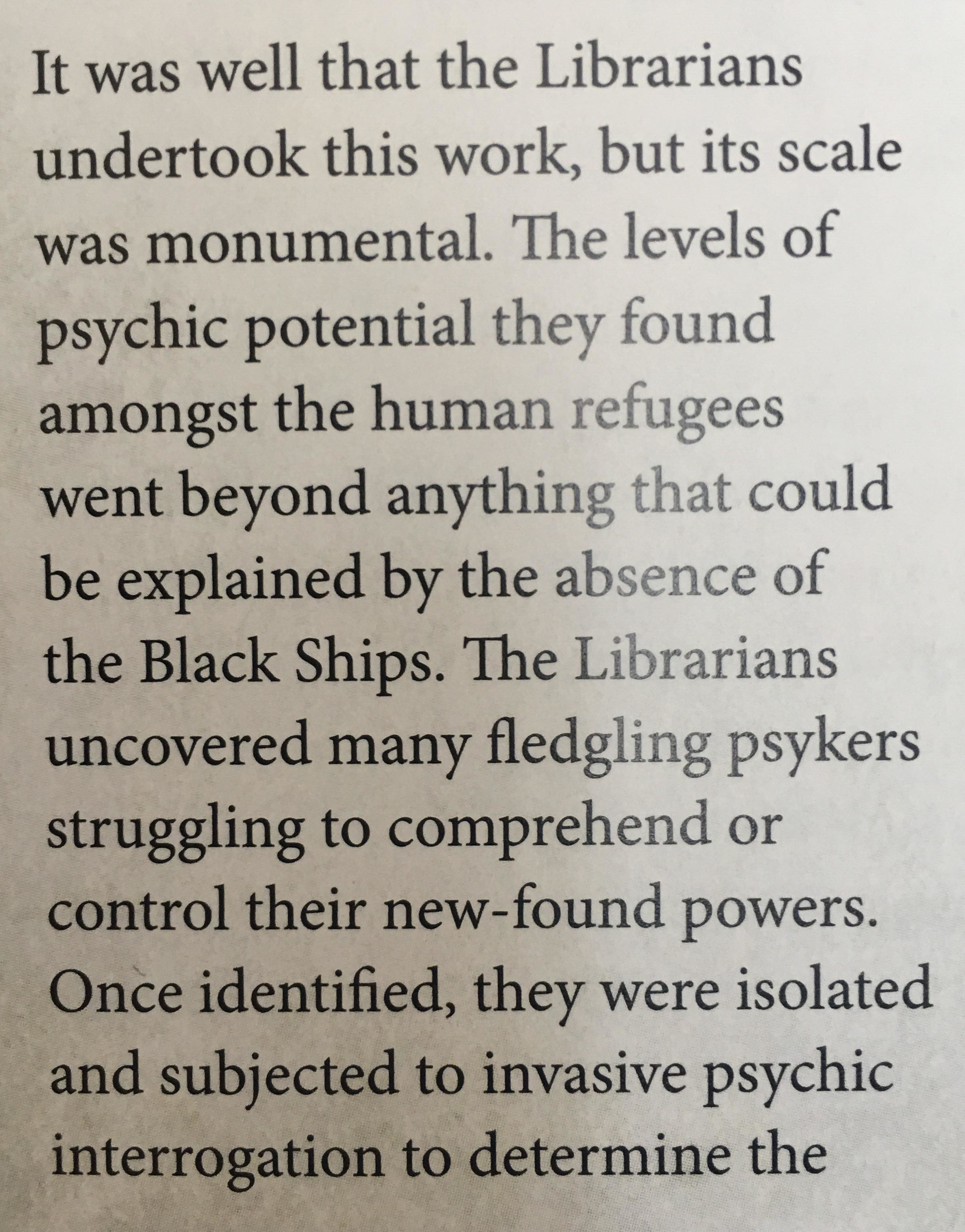 -An abnormal amount of human psyker is appearing. Even if the Black ships were here it would still be too much!
-Primaris fall to the black rage like other marines, meaning they are true sons of Sanguinius. Eliminator sergeant, Chaplain are examples given in the fluff. 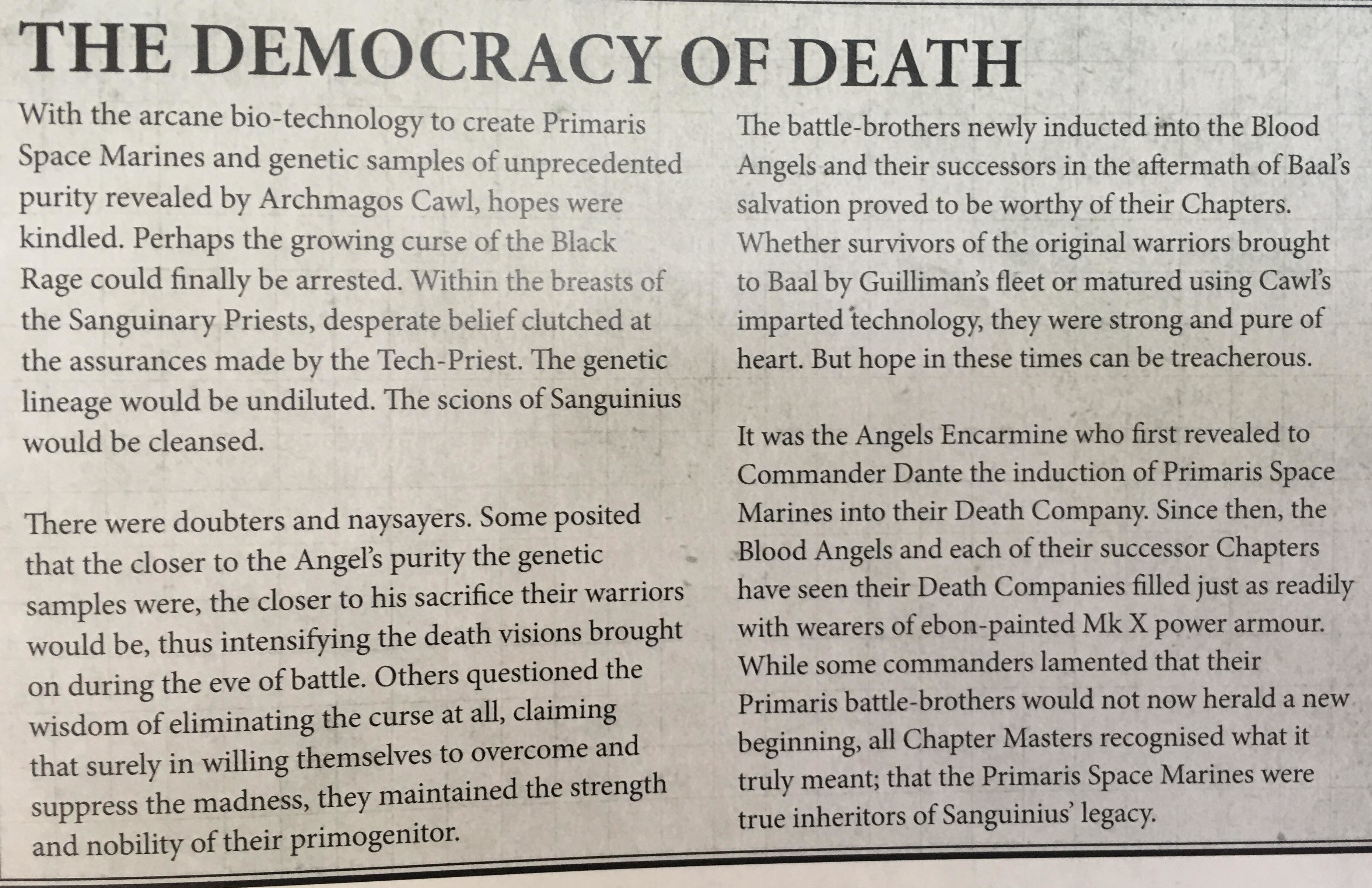 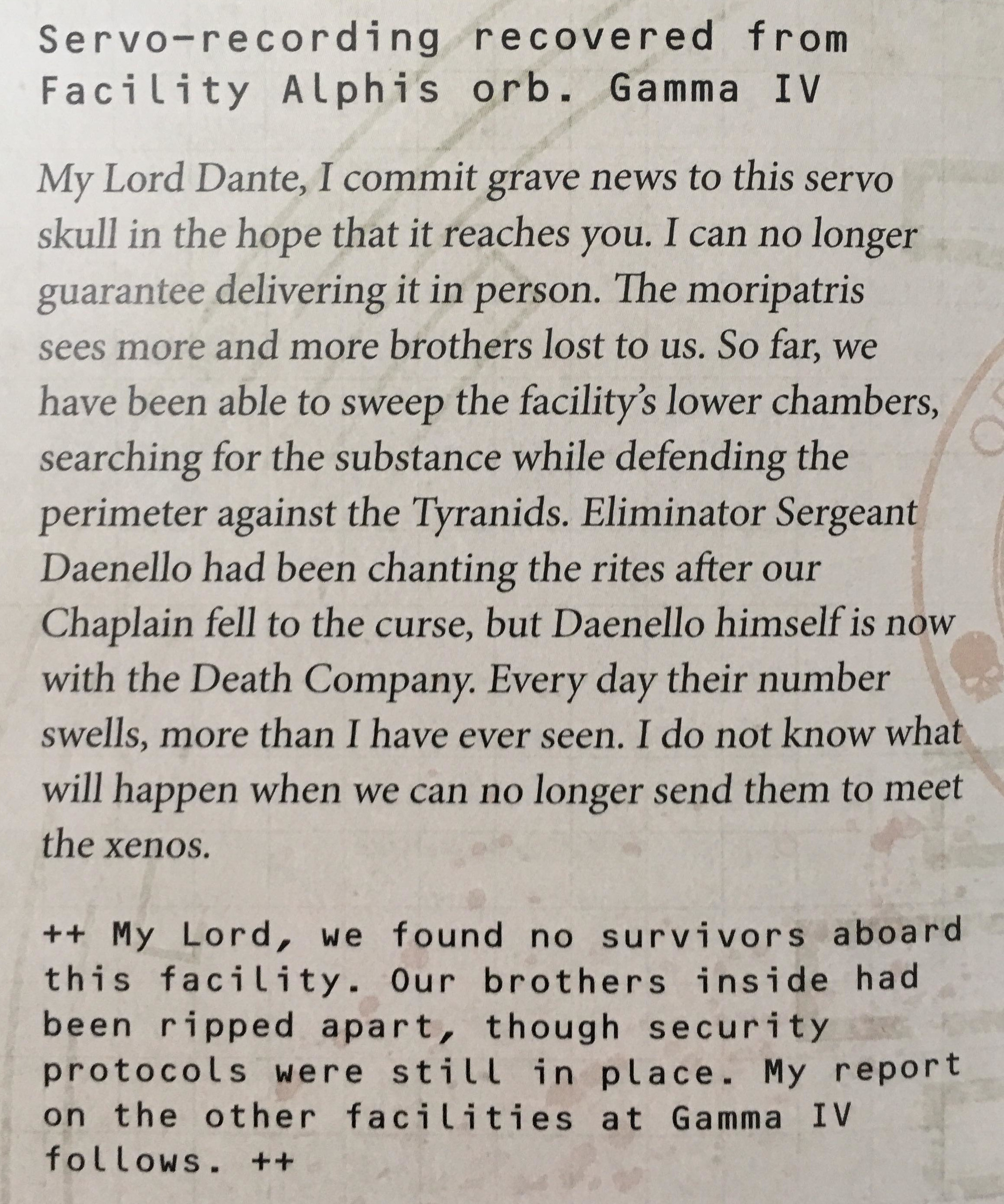 The book is interesting fluff wise nothing earth breaking but in 20 pages you see what the situation is in the zone, what are doing the Blood Angels and give some hints of what's going to happen.

As Wrath and Rapture is getting closer gw released a fluff article on the realm of chaos.
It's small but a very good read.

As AOS2.0 is is approaching, Malign Portents story arc come to an end.
The final witness is the Penultimate story !
This one is about the siege of Nagash Town !!

Go read it then come back : https://malignportents.com/story/the-final-witness/


They were heading to the city of the Great Necromancer. They were marching upon Nagashizzar.

The choking lakes of tar that flanked Nagashizzar’s northern border began to overflow, sending great waves of black sludge flooding forth. From this viscous muck emerged thousands upon thousands of greenskin brutes, bellowing in fury as they charged towards Nagash’s city. Where they had come from, I could not see, for whatever force had guided them into Shyish was barring my vision.

Really liked this one (and the series too)

-Stormcast : become less and less human. Glitch in the reforging, the flaw. Each Stormhost have a different flaw.
Ie : hammer of sigmar : get lightning from eyes and stuff.
Hollowed knight : Glow, driven by vengeance, but get diluted, forgot memory and become a storm warrior fighting the chaos.

Overtime the SC rules will represent flaw in the reforging.

-Hammer of sigmar : poster boy front line.
-hallowed knight : Zealot, worhsip sigmar really hard. So pure, evil magic work less on them.
-Astral Templar : Uncivilised, barbaric, Recruited from jungle. Big on killing big monster. They don't really fear, the bigger the foe the more they want to kill hom. They are the big game hunter.
-Celestial vindicator : Almost berzeker, on the brink of death they want strengh and are driven by rage/hate. They want revenge (hinted that their flow are becoming more more and more hatefull).
-Celestial warbringer : Tribe that can see their own death ! So they are quite fearless cuz they know when their death is. They are warrior mystic.
-hammer of hammerhal : Previoussly death warrior rezed as Stormcast.
-Lion of sigmar : In dev, big on lightining fast strike and big roar (not much investment for now)

Celestant prime stay shrouded in mystery, but when he smite someone there a small chance to redeem him and send the soul in azyr. (they even made a few new sc)

He then give a recap of the first season (Finding ghal maraz, God beast, all gate war). They have years of story in front of them.

Cities : 3 big one, (industry, living one, mystic one) all in the realm of life. Hammerhall in fire/life (no reveleation) just an enumeration of different cities. They have invested lot of time on them (with the box set), they even want to dev some politics aspect.

Redeem guy(chaos worshiper reforged) should not fall in chaos again.

Nothing exceptional but still a great interview.

Ps: didn't had time to correct names and grammar, will do later !

This was Ynnead, god of the dead. Ynnead, last hope of the Eldar.

I don't know if you saw this info but there is an article on Gav Thorpe blog about how a short vignette of prose about Eldrad Ulthran 16 years ago lead to the release of the Eldar god of Death !

It's interesting to see the point of view of someone that have been so invested in GW. To be honest i don't totally agree with the idea that the GW should only do meta plot. I love when the story get personal, i am not ashamed to say my Generic general is always Rafen (Blood angel MC of the novels)

Anyway its worth a read !

Interesting read about the Guilliman’s Empire ! (or Sanguinius)


The arrival of Sanguinius was the last piece of the puzzle, and he was anointed Emperor of Imperium Secundus, with the Lion as Lord Protector and Guilliman as Lord Warden. This triumvirate would rule in the best interests of all, supported by elements from all nine of the loyal Space Marine Legions, who had been brought together by the new beacon that lit the warp.

With the release of the Dark Imperium, the brand new edition of Warhammer 40,000, just days away, Black Library author and regular contributor to Warhammer Community, Guy Haley, tells us the tale of how he approached the task of writing the next chapter in the history of the Imperium.

Phil Kelly and Andy Clark talk about the new background !

or check the warhammer tv timeline on FB

Some fluff bits from the rule book: scroll down at your own risk!


- The hot topic is the Great Rift, dividing the galaxy in two. One side can't see the Astronomican's light anymore. Half of the space marines chapters are unaccounted for and a few of them got destroyed.
- Assault on Terra, Emperor's palace was assaulted by a Khorne army, but RowBowTee took charge of the defense with Primaris + Cutodes + Sister of Silence.
- During the darkest hour, when all communication where cut, multiple sightings of the Legion of the Damned, (Baal, Armageddon...and hundreds more planets)
- Indomitus Crusade: Lots of different strike forces, lead by Guilliman. Imperial Fists are mentioned.
- Armageddon: Mega Warp storms transform half the planet into a daemon world, Khorne and Tzeentch fight each other so much, that orcs and human fought side by side (briefly). Note: Salamanders prevented a ritual to summon Angron back to the planet !
-Baal: Blood Angels nearly wiped by Leviathan's fleet, saved by the rift and Guilliman. Expect a Khorne vs Blood Angels thing in the future.
- Plague of plagues: Mortarion besieges Ultramar - there's even a mention of a fight between the two brothers.
- An intermittent passage through the Great Rift was discovered near the Eye of Terror. Revealing a sector owned by Chaos Imperial Knights!