Just a quick post to wish you an Happy Aos2 release !!
While waiting you can still read this fluff summary by WHCT.

Also, i'll be away all week end so expect slower post.
Battletomes review will be posted Sunday or Monday (sorry)

ps : All the week end i'll be at the french national Guildball tournament getting Rekt (as i don't play Guildball more than once a month^^)
if you are around and want to say hello search for bob ! :D

This is the end !

This is it, go read the last Malign Portents story :D


Probably nothing, he thought, taking his triskele to the next jewel.

spoiler : From now on everything is rolled like in the videos ;)

As AOS2.0 is is approaching, Malign Portents story arc come to an end.
The final witness is the Penultimate story !
This one is about the siege of Nagash Town !!

Go read it then come back : https://malignportents.com/story/the-final-witness/


They were heading to the city of the Great Necromancer. They were marching upon Nagashizzar.

The choking lakes of tar that flanked Nagashizzar’s northern border began to overflow, sending great waves of black sludge flooding forth. From this viscous muck emerged thousands upon thousands of greenskin brutes, bellowing in fury as they charged towards Nagash’s city. Where they had come from, I could not see, for whatever force had guided them into Shyish was barring my vision.

Really liked this one (and the series too)

So in the Nighthaunt presentation we hear a feminine voice. It's the new mortartch sent by Nagash to reclaim the souls of Stormcasts.

Khalida would be my choice as the head decoration look a bit like the shadow in the image + the tantacle things look like snake.
What do you think ? 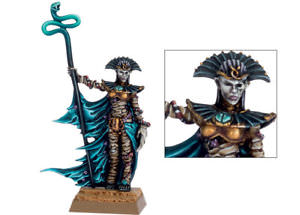 I was reforged. It is by Sigmar's will !

LINK Go read it.
I can't say anything without spoiling.

Go read it there :


Reshevious hated this place, with its monochrome mists, its shadowy suggestions of trees hulking all around, and the ancient ruins that towered up from the forest like the bones of long-dead cathedrals scraping at the ink-black sky. All was silence and stillness here; the cavalcade’s clangour echoed away into nothingness and was swallowed by the dark.
Yet here was where the Inhilus’ screams had led them, and so here they continued their hunt.