GW just revealed their planning for next week :

Gw 2 :
Orlock gang
secret stuff on page 5
Painted Orlocks : modeled from Andy colleague (Adams) that left to the Middle Earth team :D
Only Slug weapons on the starting sprue (bolt too i hope)
Orlocks are baseline Human
Heads and necks for Orlocks and Cult are compatible.
Chaos Cult will get WD list using Cultist 40k models.

Harpoon Launcher, can drags target and models in between, very fun.

Hangers-on : Inspired by support cast of BB, they hang around and support the gang.
They don't fight unless you are attacked inside your den. "Doc, Ammo-Jacks, Scout, Cook"

Hired guns
Hive scums : Canon fooders ^^&
bounty hunters (very skilled), choose different stat line, up to 5 weapons, 3 skills, Bounty rules
If you have lot of money (because super expensive) you can even equip Half Horn with all the weapons on the model. Bounty Hunter really fill a gap you need filled at a cost.

Pre generated characters (special char)
6 included
Tiny better than generic one but you can't custom them.

Specials Scenario
Ambush type mission in WD to try Badzone delta where you escord a ganger to an extraction point.

Blank cards are printed right now
They are designed to be erased/written.

Painted version of the hive scums !


Hive Scum can be hired to your gang during games of Necromunda, and they range from desperate mercenaries with nary an autopistol to show for their efforts, to well-trained killers who’ve made a comfortable life for themselves by being very, very good at murdering people. These guys represent just a few of the upcoming Hive Scum you can add to your gang – if you’ve got the credits. The rules for hiring Hive Scum will be available in Gang War 2, available next year.


House Orlock is made up of miners and engineers who use ingenuity and grit to solve the various problems of the underhive, whether they’re making sure mining quotas are met or are just working out the best way to neutralise a charging Goliath ganger. The new Orlock gang remains true to the rebellious spirit of their forebears in the previous edition of Necromunda, but they will be just as customisable and detailed as the Escher and Goliath gangs. There are also some new weapons on the way, including the intimidating looking harpoon launcher!


These desperate ruffians are known collectively as Hive Scum, often hired by smaller gangs to make up their numbers while they grow. Forge World will be bringing Hive Scum to your tabletop in the new year, starting with these two:


The Specialist Games team intend to keep expanding Zone Mortalis as a fully fledged way to play Necromunda for those who are yet to invest in some 3D terrain. To help this, these tiles add new hazards to your game of Necromunda and help you make your 2D battlefields more diverse, deadly and fun to play on.

These Orlocks are AWESOME !

Legacy gangs rules are out :
https://necromunda.com/wp-content/uploads/sites/5/2017/11/ENG_Necromunda_Gangs_Of_Legend_Download.pdf

With extended armory and rules !!

Playing the new Necromunda in a 3D world !

In the Gang war gaming supplement, there are a few pages dedicated to the rules used for playing with 3D scenery.
Nothing complex, but give a lot of extra depth to the game !

As shown on the cover image, a Necromunda table is on multiple level with a lot of pathway between them. Off course this amount of scenery ask for a few more rules than in the Underhive rule set.

In 3DMunda you don't use the Los rules included in Underhive, instead you use these : 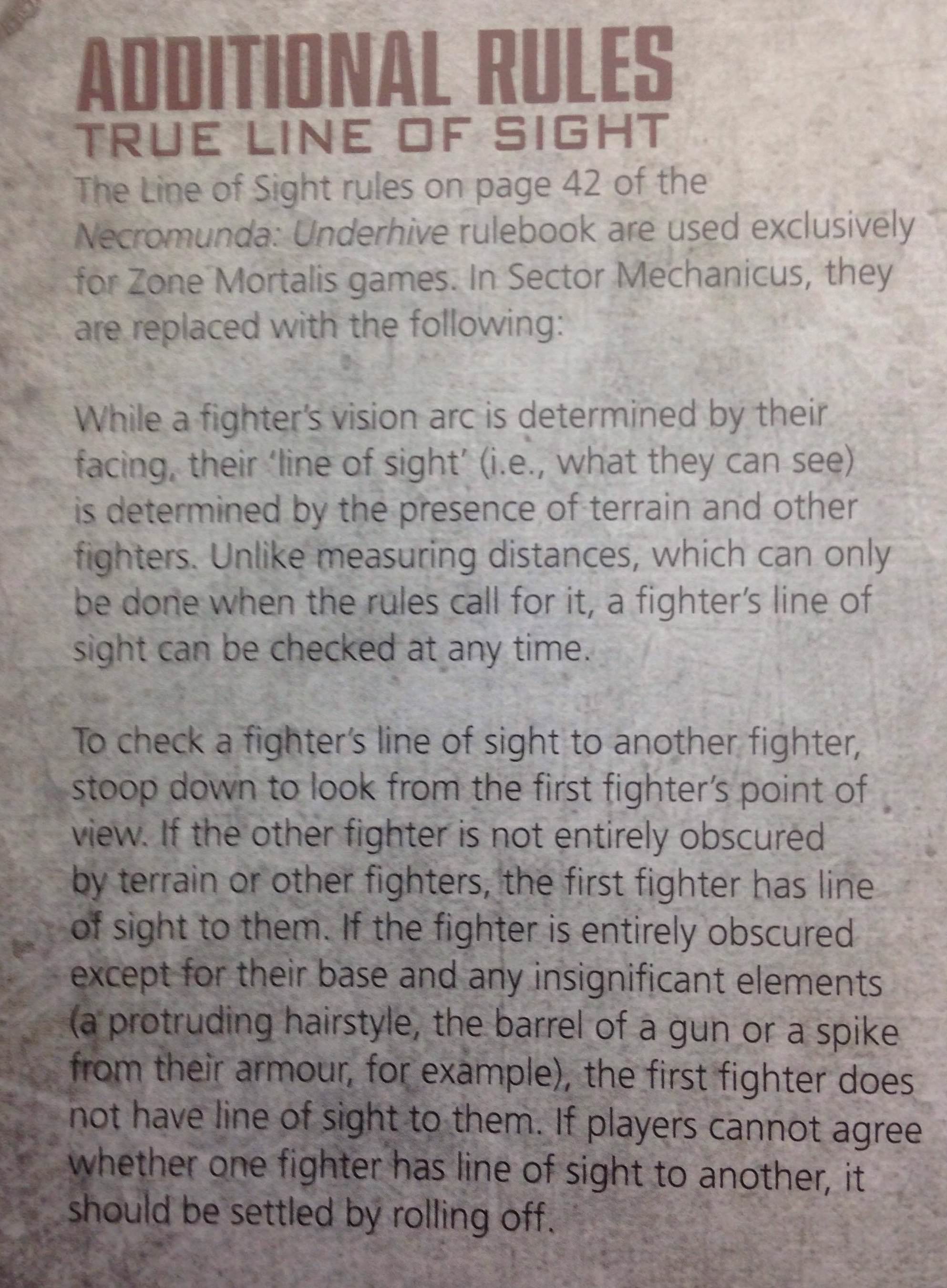 So you check Los by looking through the eyes of the model and you can't mesure anything prior shooting !
Nothing incredibly new but i like these additions a lot !

Good reminder that even in the depth of the Necromunda Hive you have to be nice :D 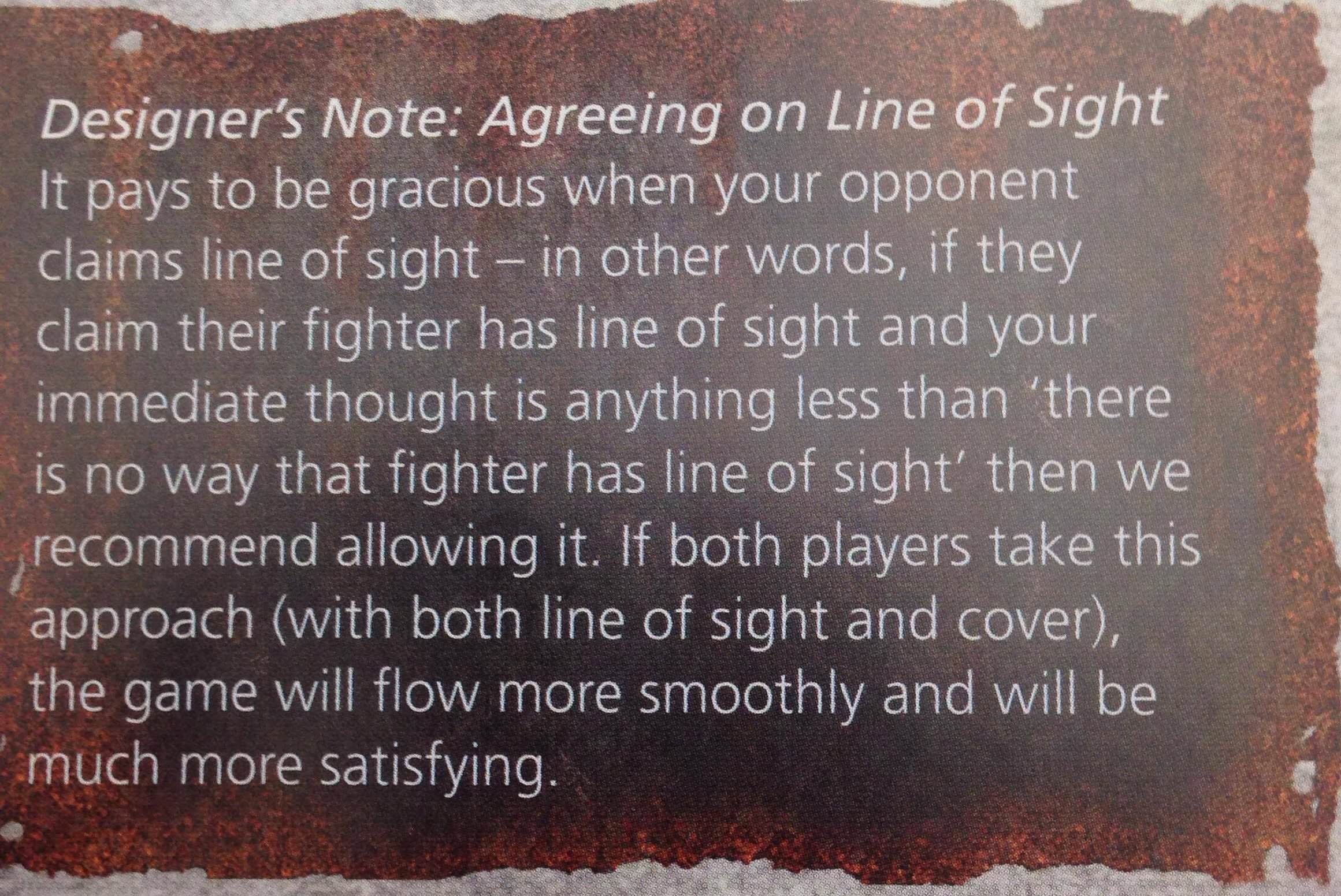 The classical cover explanation with an image. 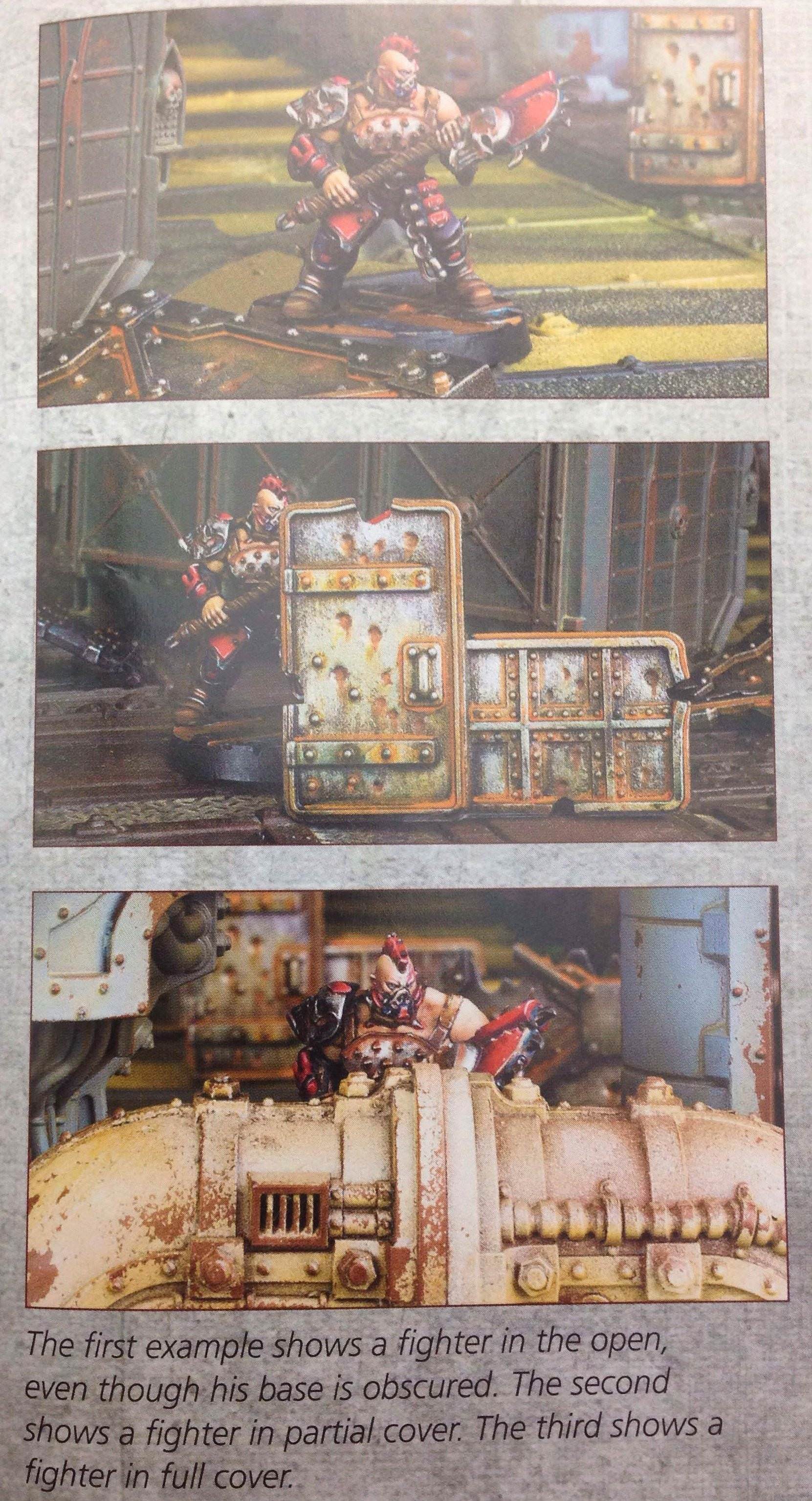 How to build this cool board ? 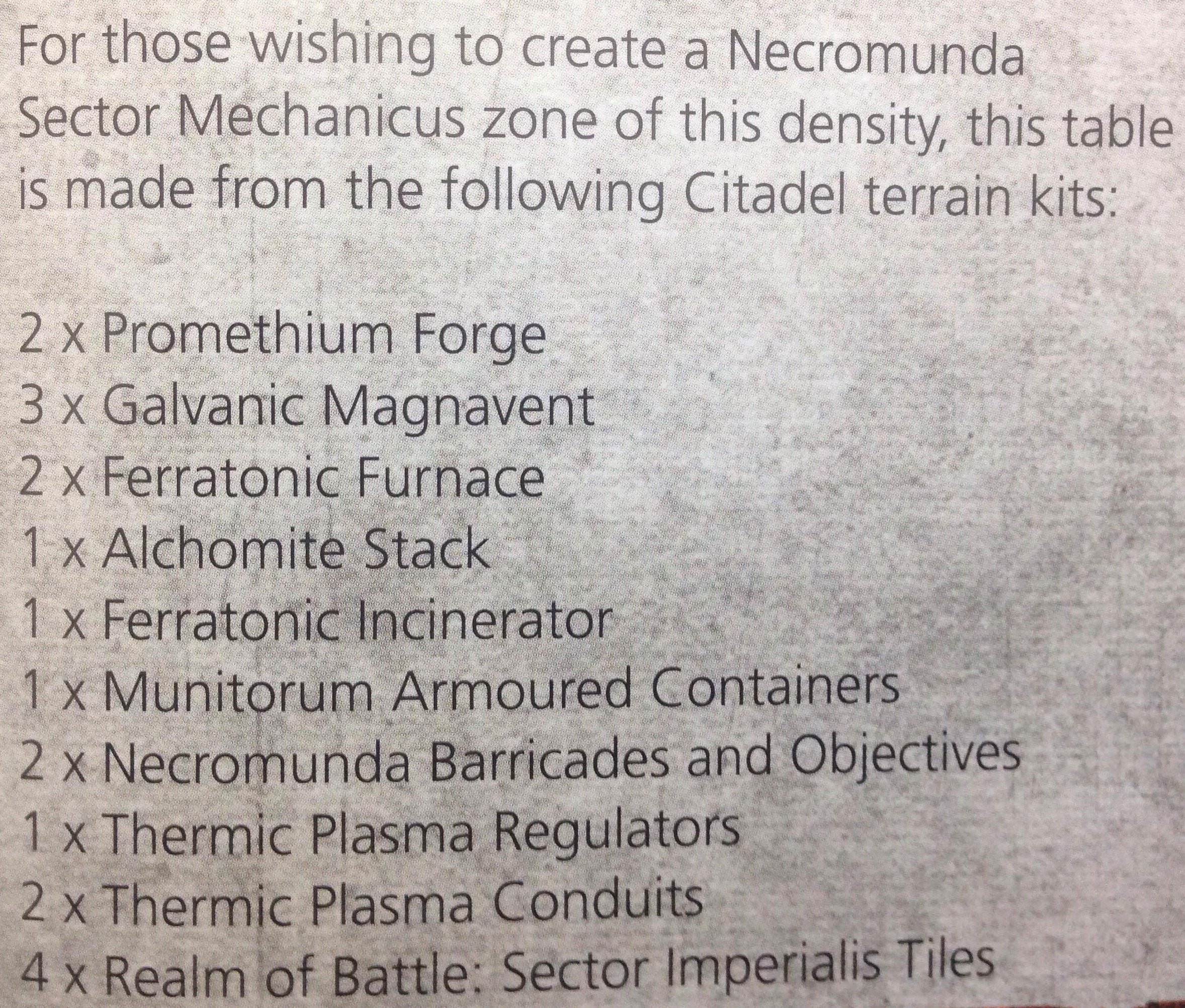 -Difficult terrain cost twice the movement.
-Platform where you can fall from if you fail init roll while being 0.5" away from the edge.
-Railway that help you avoiding fall (add +1 to the initiave roll for avoiding fall, 1 still a fumble off course.) 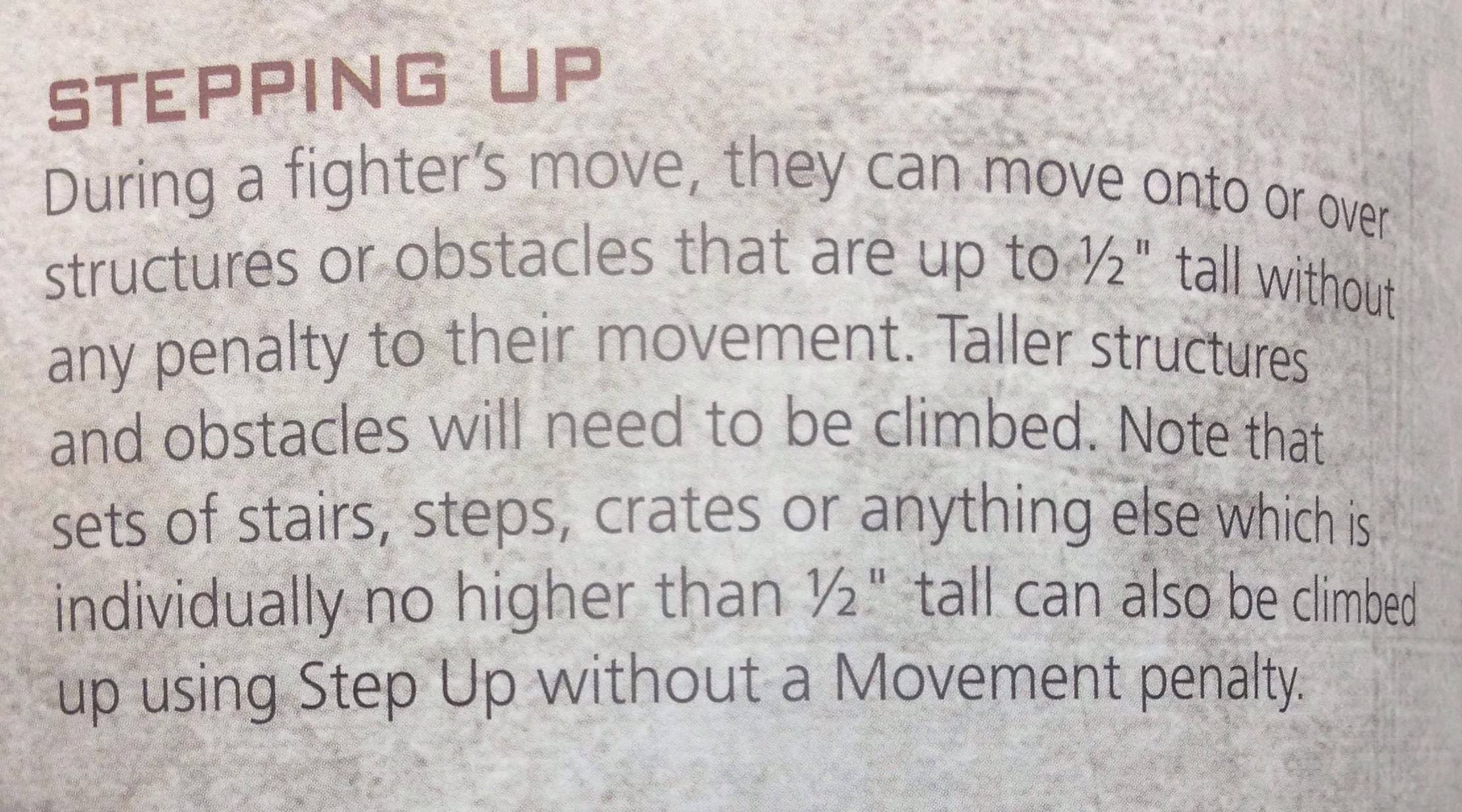 So very low wall, junk on the floor, bodies ^^ don't slow you. 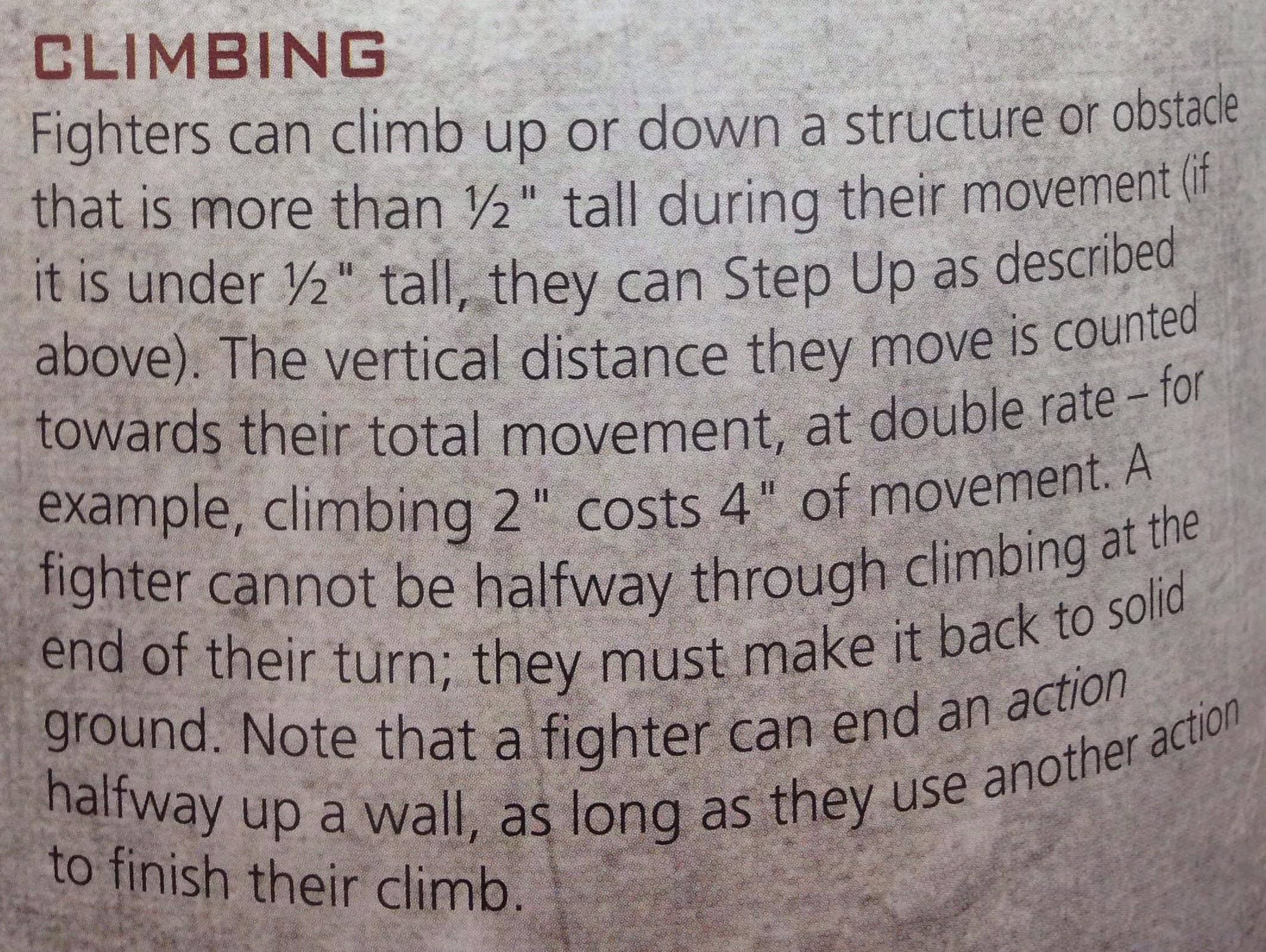 What a nice addition, you basically climb everything now ! ok it cost 2" for 1" and you must end your turn on solid ground. But you can use a double action to climb (Sprint allowing you to climp 9" a turn !!). There is no climbing roll to make. 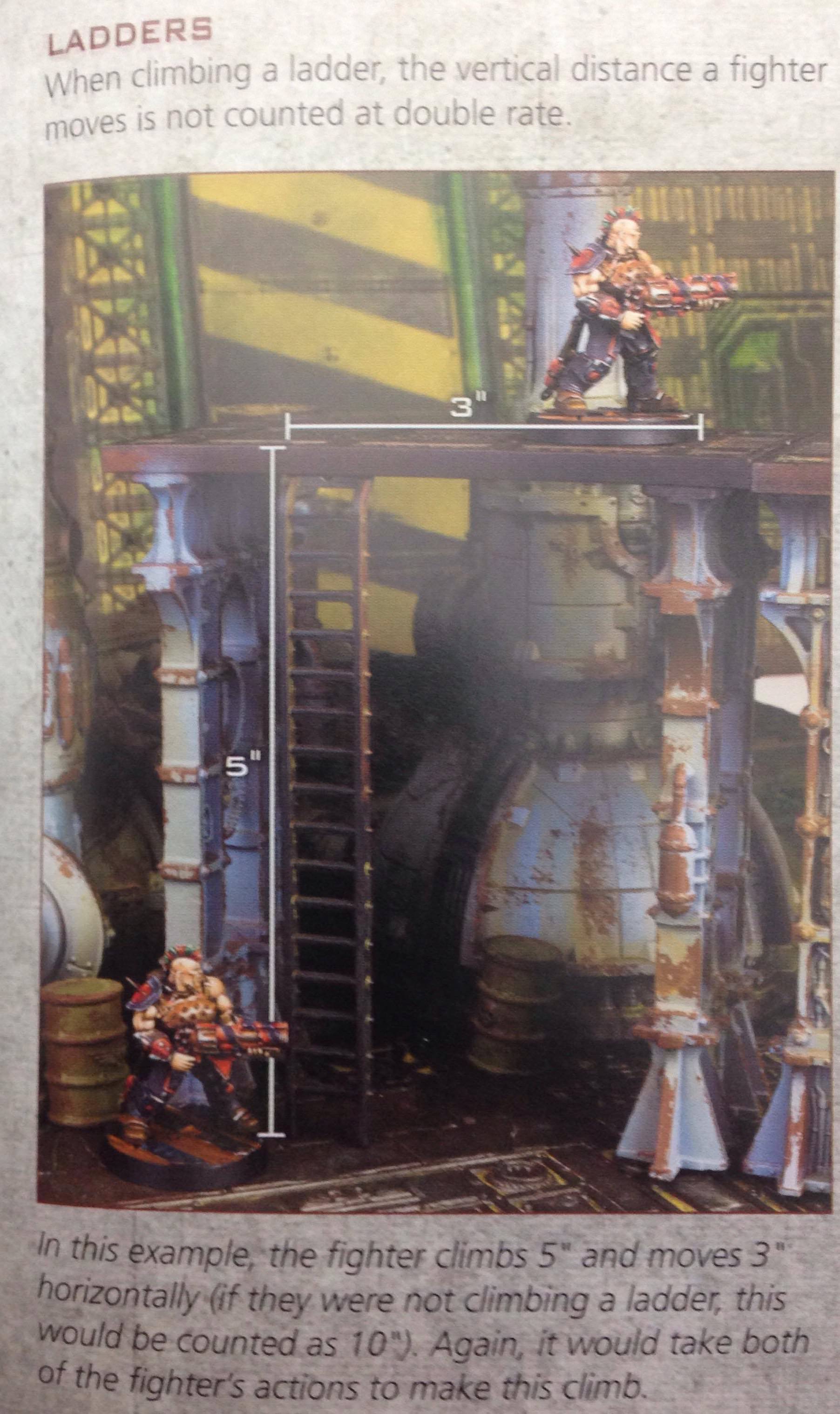 Exactly like climbing but by using a ladder you are not slowed ! 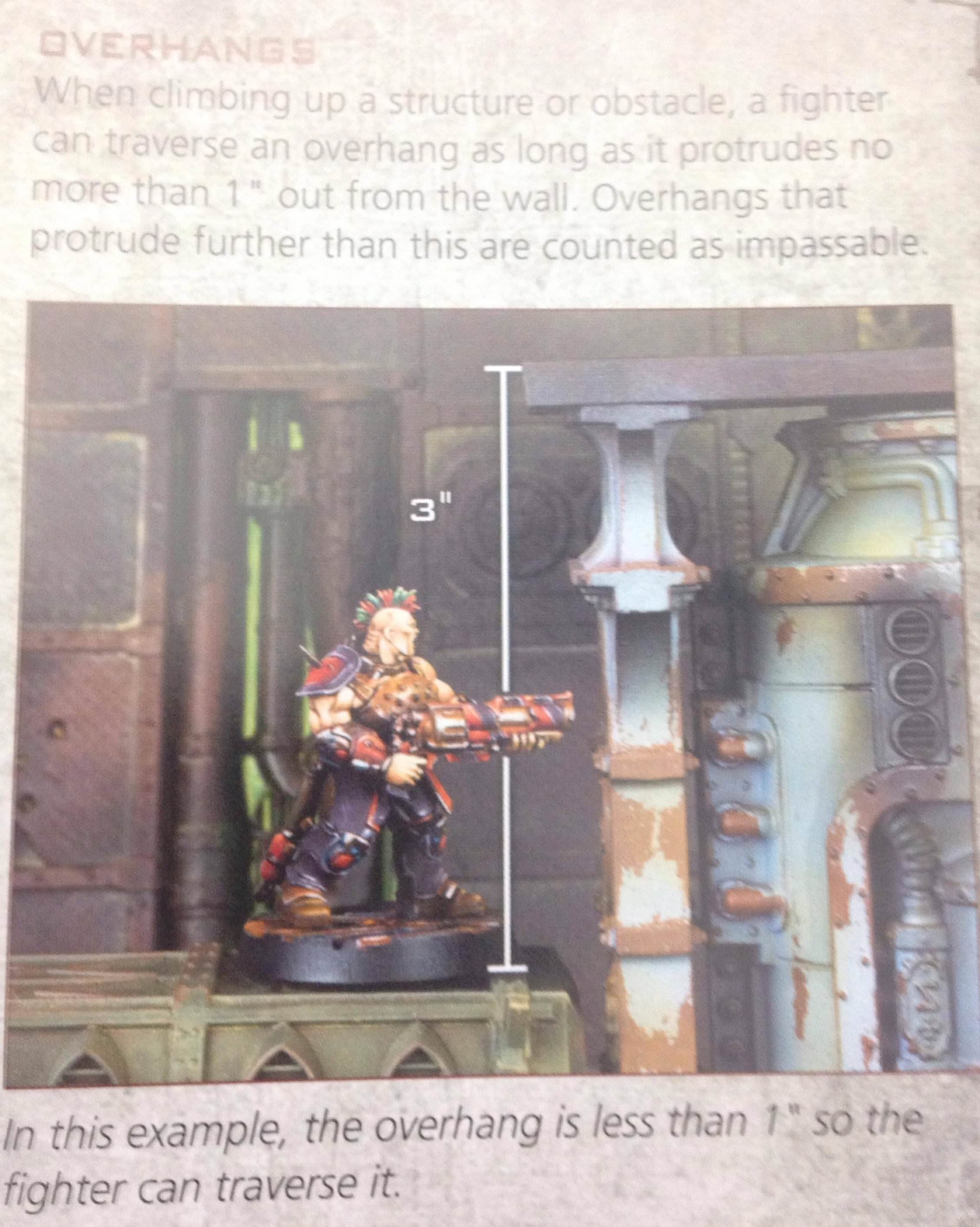 I am not sure this was a necessity but it's good to have this corner case solved.

While the other forms of movements are safe enough to not require a roll, these 2 are for the optimistic ! 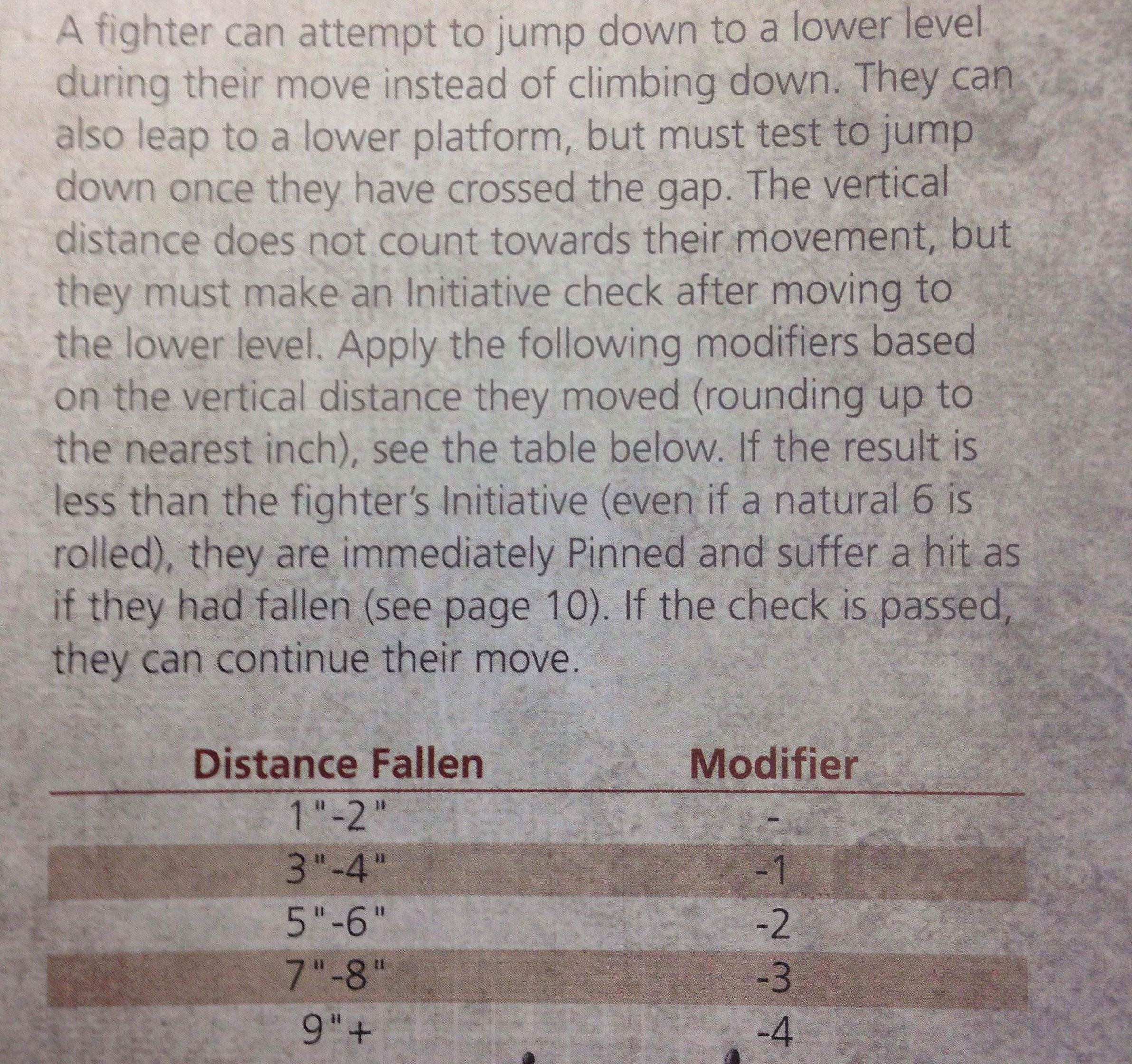 You roll initiative (that is now presented like 40k 8th ws/bs) if you roll less than your initiative you are prone + suffer a hit with a strength depending on the height. Note that the higher the fall the bigger the malus you get for the roll, as an exception rolling a 6 is NOT always a success.
If the roll is passed the vertical movement is FREE !!! and you get a lot extra threat range ! 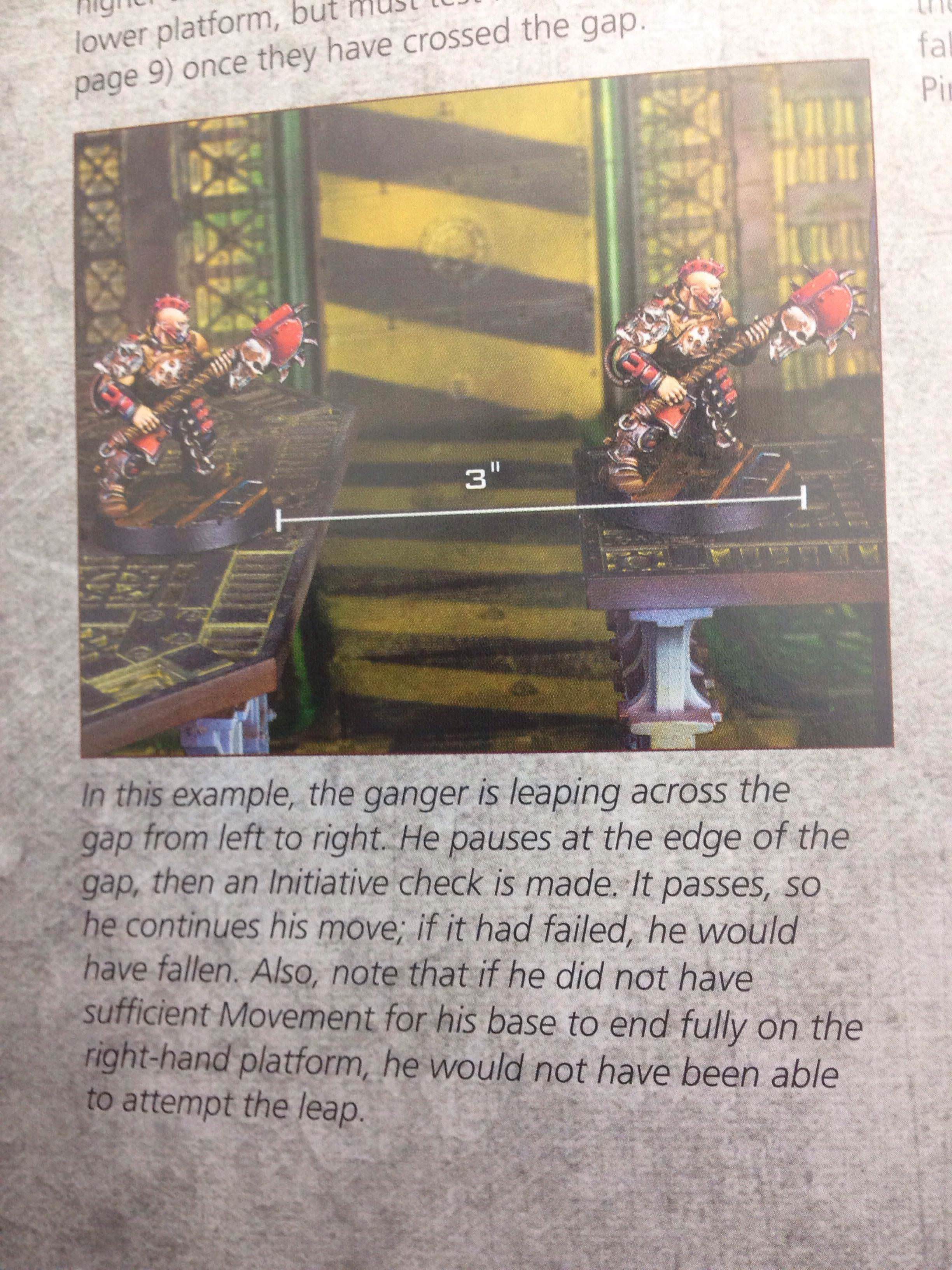 You must have enough movement to fit 100% of the base on the other side.
You roll init without modifier.
If you fail you fall ^^ (HAHA).
You can jump to a platform 2" higher or to a lower platform but you have to roll for jumping down too !

Ok that's it for a quick rundown on the 3D rules for Necromunda.
I really love this rule set, the game is so rich with it and there is no slowing down of the game.
We only played with it once (with our old gang proxy) but the Escher gang feel totally different in the 3D mode. They are so nimble and fast
jumping everywhere, charging from upper platform. It really changed the game for us !!
Special mention to the Combat-shotgun with knockback ammo and rapid fire ^^

Details and options of the Escher sprue

Necromunda is a game with a high level of customisation, and I really wanted to give you a good overview of the sprues, so you can plan how to equip your girls, and I'll do the Goliath's sprue tomorrow!

Half Horn the sanctionned bounty hunter !

Half horn is on pre order on fw website

Part 4 of the Necromunda review.

In this game there is 2 progressions axis : Gang members can gain XP and stuff !!

When gang members participate in a battle they get the opportunity to gain experience points and then they can use them to acquire skills and characteristics upgrade.

A) 3 Standards way of gaining XP :

-A fighter taking an enemy out of action gain 1 xp. If you kill more than one in a single action you gain multiple xp.

-A fighter that take down a champion or a leader gain 1 extra xp.

-Taking part in a battle 1 xp.

-Variable gain (1 xp most of the time) by accomplishing scenario objectives.

-Rolling 11 on the injury table grant you 1d3XP
-Mentor skill (leadership), Grant 1 extra xp if you are within 6" of the model with the skill.

There is 2 options here : Ganger and not Ganger.

As you can see It's quite easy. Each time you reach 6 xp you gain one advance by rolling 2D6 and reset to 0XP.
On a 2 or a 12 you become a specialist and can now spend xp and gain skills. But you still count as a Ganger for equipment purpose. 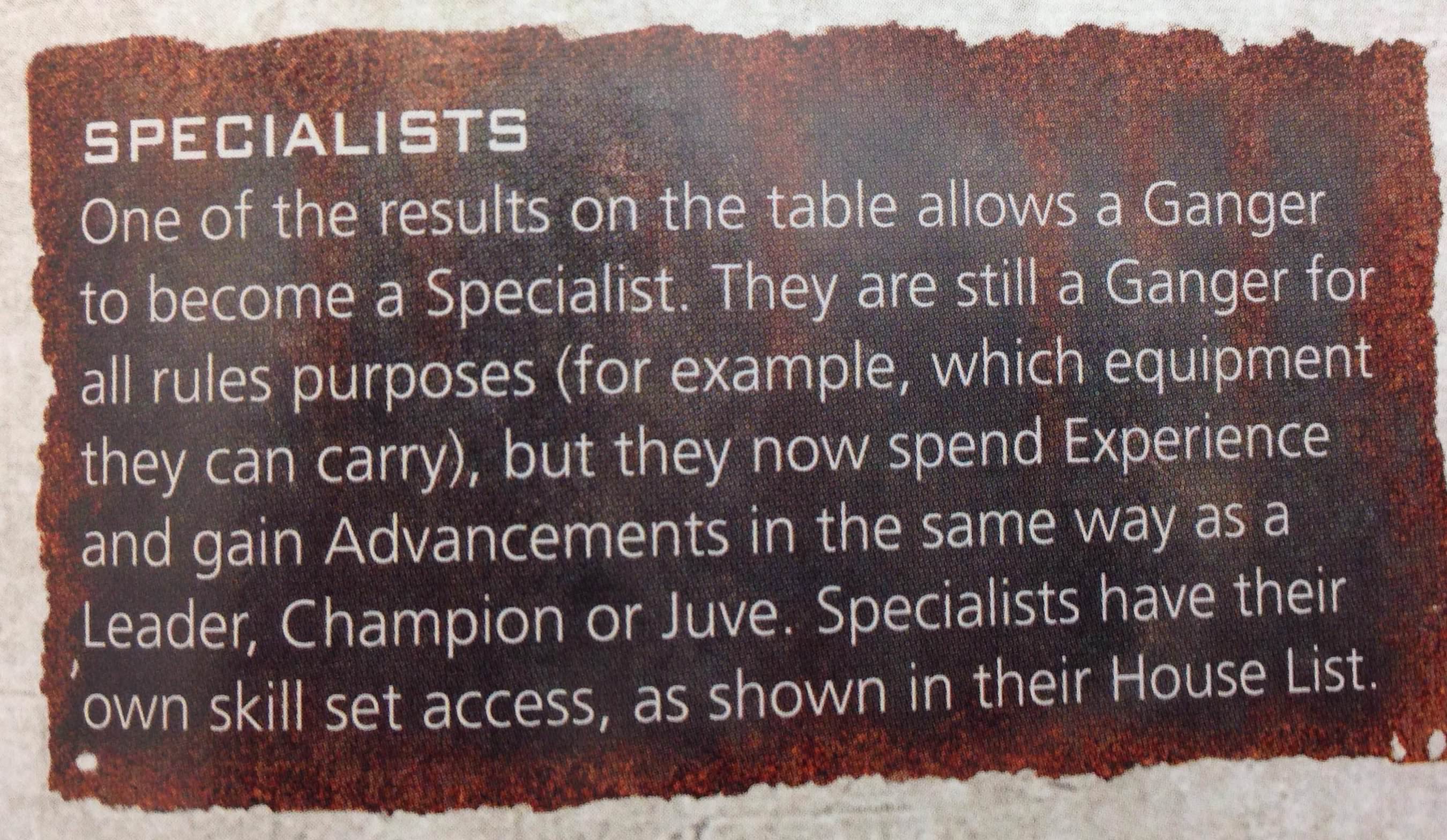 B) Not a Ganger

It's easy too, each model bank is own XP gain, and when you have enough you spend on what you want or need.

Each time you get a new advance you have to pay 2 extra XP per advance you already have.
ps : Juvies ignore this rule so they always get xp at a basic rate.
ps2: During a down time between Turf war, juvie with 5 or more advances become Champion. BOOOM !

There is multiple way to gain money ! The first one is the turf rating, then Special territory, working the turf action, Sell stuff and slave !

Start at 1, there is no maximum and it can increase or go down after each game played (depending on scenario)
Once per cycle, after you have played the first game, you gain Turf rating X 10 credits. Yea it's going to take a while to buy these dual plasma pistols ^^.

These are special locations in your turf that have special effects you can exploit.
You have a small chance to gain one each time your turf rating increase. When you gain one you randomly select it.
ps : There is no Archeotech ruins :(

If you are lucky, you gain a territory allowing a Ganger to recolt mushroom or mine. Lot of money but risk for the Gangers doing the job. Just don't use the BS 2+ Ganger ^^.

C) Work the gang turf.
It's the primary source of income at start, each champion or leader can use his post battle action to gain 1d6*10.

With money you can buy common items, rare items or new gang members !
Each weapons, munition, grenade can be Common or Rare.

Commons Item are the most basic and the cheapest. There is 2 sources for them, you can buy them from your Gang Armory or from the Trading Post by using one post battle action from a champion or leader.
You pay and get the item there is nothing more to it :D

ps : In the Gang Armory there is no rarity, everything is common but the selection is limited. 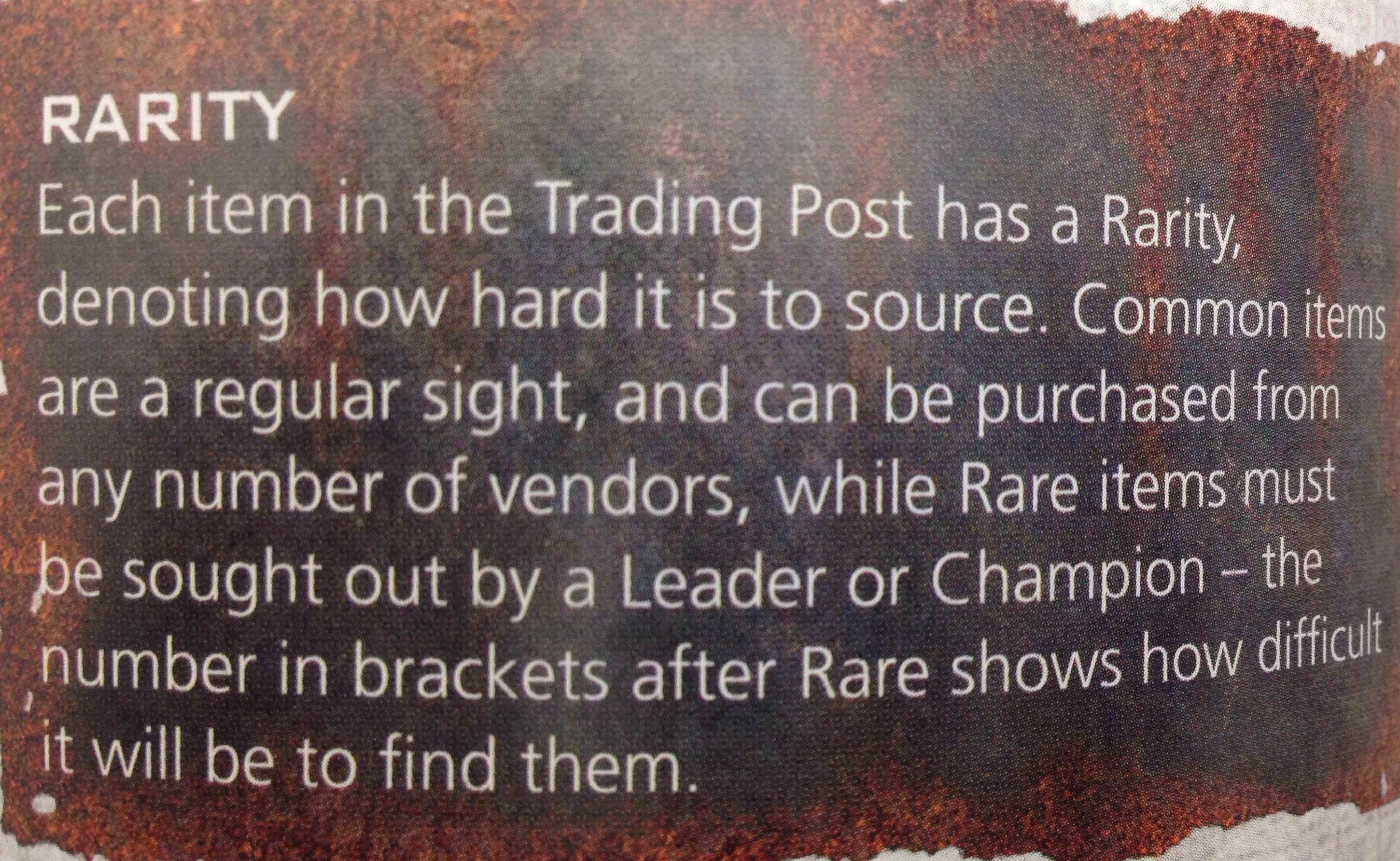 In the trading post you can buy nearly everything, but rare items are quite hard to get. Each rare item have an availability score (7 to 11) that you need to get for finding the desired item.
You need to spend one or more post battle action, you roll 2d6 and try to reach the rarity score. You'll get +2 if the boss do a trading post action and +1 for each extra champion helping. There are a few more modifier dispersed in the book but nothing earth breaking. After rolled each member participating in the action can buy one item with a rarity inferior to the score you made.

Spend cred to get new members !
You have to respect certain limitation.
1 leader, 2 champions (+1 champ per 10 points of Reputation).
Gangers must represent half of the fighters in the roster. 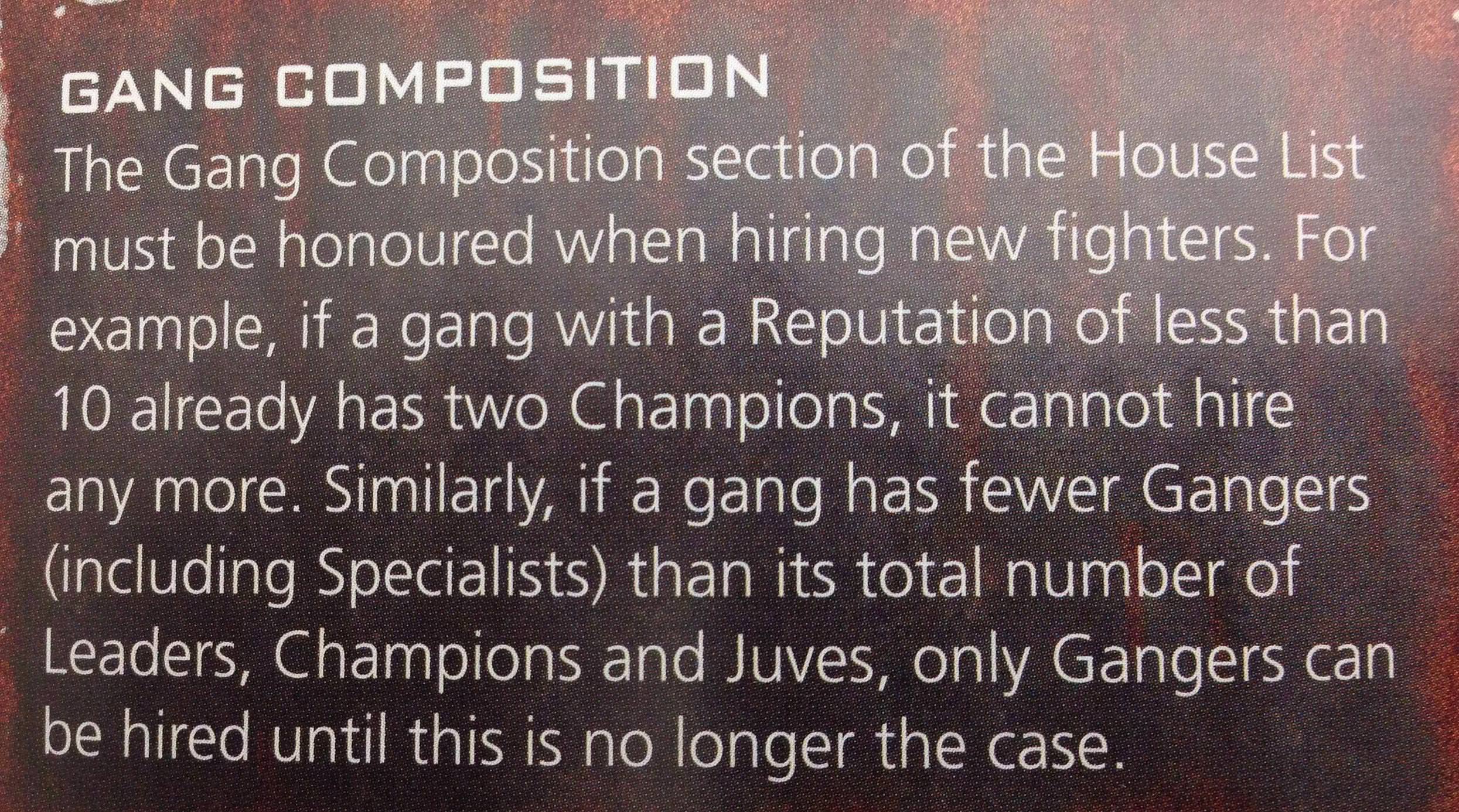 That's all for this section !